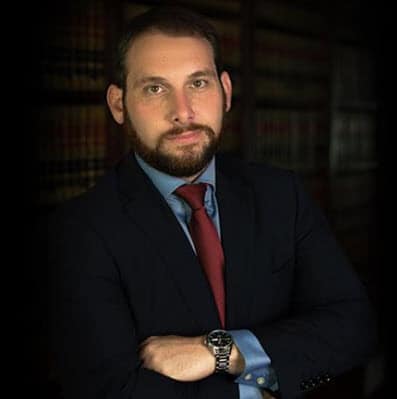 Alex King grew up in Jacksonville. He was a National Merit Scholar and attended the University of Florida where he spent every semester on the Dean or President’s list. He graduated with honors and a 3.95 GPA while earning a dual degree in Political Science and Criminology.

He also received his law degree from the University of Florida, where he was the Managing Editor of two prestigious law journals and earned awards for his work in White Collar Crime. He graduated near the top of his class. Alex spent two summers clerking for the United States Attorney’s Office in Jacksonville and later served as a summer clerk for a local Federal District Court Judge.

After law school, Alex worked as an Assistant State Attorney and managed the DUI Unit for the Fourth Judicial Circuit. He was awarded Mother’s Against Drunk Driver’s (MADD) Prosecutor of the Year award. During his time, he specialized in complex DUI prosecutions, worked with legislative working groups, and trained numerous prosecutors and law enforcement officials throughout the southeast United States.

As a defense attorney, Alex has represented high profile clients in complicated white collar prosecutions throughout the southeast and has extensive trial experience in State and Federal Court. Alex has represented numerous business owners, doctors, pharmacists, law enforcement officers, and other professionals in cases ranging from DUIs to complex, international fraud and drug cases.