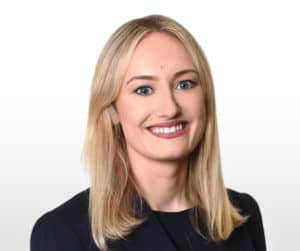 Aoife-Roisin Bourke advocates for victims who suffered physical harm or were killed because of the terrorist-related aircraft crashes of September 11, 2001 and the subsequent response efforts. She focuses her practice on assisting members of the 9/11 community bring forward claims under the September 11th Victim Compensation Fund.

Aoife-Roisin joined Marc J. Bern & Partners in 2016, as the firm’s September 11th Victim Compensation Fund Department Manager. After her admittance to the New York State Bar, she has remained at the firm as an Associate Attorney.