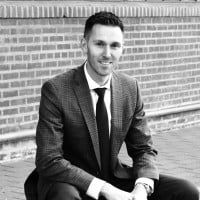 Born in the Midwest, Chad Kelliher received his undergraduate degree in Political Science with a Co-Major in International Studies from the University of Kansas. Following college, Chad relocated to attend the Oklahoma City University - School of Law, where upon graduation, he accepted an associate position with a prominent Oklahoma City personal injury law firm and decided to make the area his permanent home.

Chad has devoted his legal career to helping injured Oklahomans and brings a vast wealth of experience in handling personal injury claims. He has been selected as a “Rising Star” by Super Lawyers, named to the National Trial Lawyers Top 40 Under 40 list and is the recipient of numerous “Client’s Choice” awards.

Chad’s history of obtaining multi-million-dollar verdicts and settlements for his clients has helped hundreds of injured Oklahomans get the compensation they deserved. Some of his most fulfilling experiences have come from helping victims and family members of those who have been injured or killed at the hands of intoxicated motorists.

Chad is also deeply devoted to helping other lawyers further their legal education and develop the skills necessary to help their clients. He is a frequent presenter of continuing education programming and in 2021 received the Earl Sneed Award from the Oklahoma Bar Association in recognition of outstanding continuing education contributions.

Outside of the office, Chad enjoys spending time with his wife, daughter, and hound dog. He is a Kansas basketball junkie, below-average golfer, shooting enthusiast, and avid hunter. Knowing the value of hard work and honest dealings, Chad prides himself on being equally adept in the woods, a flooded duck marsh, or the courtroom.