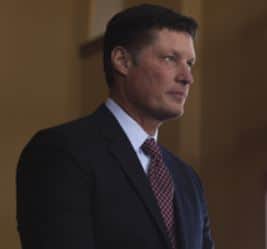 A True Texan for the People

Dan has dedicated his career toward helping others by persuading groups of people to stand up for what is right. His abilities and work ethic made him a successful State Representative in the Texas Legislature. Now, as an active Texas Trial Lawyer, Dan stands up for the rights of those who can’t defend or speak for themselves. Never face your opponent alone. Call Dan.

From the Capitol to the Courtroom

Dan served as a State Representative representing Milam and Williamson Counties in the Texas House of Representatives from 2003 to 2011. He was an active member on several high level committees, including the House Appropriations Committee and the Budget Conference Committee, where he was the main health and welfare budget writer. When not in session, Dan served on the House Select Committee on Property Tax Relief and Appraisal Reform, which held hearings throughout Texas to hear from taxpayers and officials on how to reform the property tax system. Following his service as a representative, he moved full time to the courtroom to dedicate his time to helping personal injury victims and their family members pursue the financial compensation they deserve in order to cope with medical expenses and other damages, as well as representing landowners against the government and others determined to take their land.

Every person is a collection of experiences. These are some significant moments in Dan’s life that have led him to pursue a career as a trial lawyer. Today, Dan stands up for what is right with straight-forward legal representation.

Dan was born in Austin, and a product of a ranching family. His father was a high school agricultural teacher and General Manager of the Houston Livestock Show & Rodeo, and his mother was also a public school teacher.

Dan served as class president and was a member of the famed Corps of Cadets.

Dan received his law degree from the South Texas College of Law. His prior public service includes working as a prosecutor in the County Attorney's office and the District Attorney's office in Williamson County.

Dan served as a State Representative in the Texas House of Representatives from 2003 to 2011, and on several committees, including the House Appropriations Committee and the Budget Conference Committee.

Dan has an extensive record of successful verdicts and settlements, as well being as a member of the Million Dollar Advocates Forum and the Top Trial Lawyers in America since 2012.