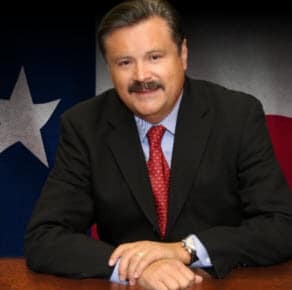 Attorney Domingo Garcia has led an active civic, legal and political career. He was born in Midland, Texas and grew up in Dallas, Texas. He received his B.A. in Political Science from the University of North Texas in 1980. In 1983, he obtained his Doctor of Jurisprudence degree from Texas Southern University in Houston, Texas. In 1982 he won a scholarship to study at the El Colegio de Mexico in Mexico City and obtained a Masters diploma in International Relations.Domingo Garcia is a former Mayor Pro Tem for the city of Dallas and State Representative for Texas. In addition, he has been an editorial columnist/TV commentator and a successful trial lawyer for thirty years.

After graduating from law school, Mr. Garcia worked as an intern in the District Attorney’s office in Houston, Texas. In 1983 he established his own law firm, The Law Office of Domingo Garcia in Dallas, Texas. He has tried numerous criminal and civil cases. Currently, he primarily focuses his practice on personal injury, wrongful death, employment law and governmental relations cases.

In 1995, Mr. Garcia won a 1.1 million dollar verdict for a man who had been hit by a drunk driver. He has won numerous settlements and verdicts in excess of millions of dollars. In 2004, he obtained a SIX MILLION DOLLARS ($6,000,000.00) settlement, one of the largest of its kind in the country, in the case of Esperanza Alvarado, a 14 year old girl who was electrocuted in an apartment swimming pool. For more information, check out our results page. In 2014, Mr. Garcia obtained over $39,000,000.00 in verdicts and settlements for his clients. He has won multiple high profile cases (see results). In 2014 in Carroll vs. Odom he with his partner won a 5.7 million verdict for car accident.

He is a member of the American Association of Justice, State Bar of Texas, and the Northern, Southern and Western Federal Courts of Texas. In addition, ever since Mr. Garcia started practicing law, he has donated his time and talents to a legal clinics in Dallas to provide legal services to the poor.

Mr. Garcia believes that public service is the duty and responsibility of every American. He has served as a precinct chairman, campaign volunteer and voter registrar.

In 1988 Mr. Garcia was elected to the National Democratic Committee where he served for eight years. He was on the executive committee and was chairperson of the Latino caucus. In 1991, he was pro-active in the political fight to create single-member districts in Dallas. He ran for the Dallas City Council, was elected, and served from 1991 to 1995. In 1993, Mr. Garcia became the first Latino ever elected Mayor Pro Tem for the city of Dallas.

In 1996, he ran for the Texas legislature and was elected. He served in the Texas Legislature from 1996 to 2002. As a representative, he served on the criminal jurisprudence and Judicial Affairs Committees. He co-authored HB 1403 which became known as the Texas Dream act which provided in-state tuition to any graduate from any Texas high school.

On April 9, 2006, Domingo was the key leader and organizer of the largest march in Texas history, when over 500,000 people gathered in downtown Dallas to support comprehensive immigration reform.