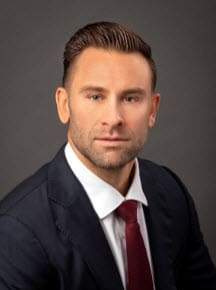 James L. Ferraro, Jr. is a Partner at The Ferraro Law Firm. Mr. Ferraro has focused his career on handling cases that involve products liability, multidistrict litigation (MDL), toxic torts, class actions, environmental litigation, asbestos/mesothelioma litigation, catastrophic personal injury, and wrongful death. Since joining Ferraro Law in 2013, Mr. Ferraro has not only grown as a trial attorney, but has been instrumental to the firm’s expansion into several high-profile mass tort areas, including, but not limited to, environmental litigation and pharmaceutical litigation. Part of Mr. Ferraro’s expansion initiative has involved representing municipal clients in both opioid and environmental litigation. Additionally, he has been involved in several multimillion-dollar verdicts and settlements. For example, in 2015, he served as co-lead counsel in Taylor v. Georgia-Pacific LLC (Miami-Dade County) and secured a $17,175,000 verdict. Mr. Ferraro was also named to the lists of “Top 40 Under 40 Civil Plaintiff Trial Lawyers in Florida” and “Top 40 Under 40” lawyers in South Florida.

Mr. Ferraro graduated from the University of Miami School of Law and is admitted to practice law in the state of Florida. He used the time surrounding his education to further his experience and prepare for his future career, while distinguishing himself academically. During his tenure at the University of Miami, he served as a law clerk for United States District Court Judge Robert N. Scola, Jr. and as a law clerk for Grossman and Roth, P.A. Mr. Ferraro was a recipient of a Dean’s Achievement Award. Prior to obtaining his law degree, Mr. Ferraro earned his a bachelor of business administration, while double majoring in finance and managing organizations, from Emory University’s Goizueta Business School. His broad range of experience enables him to provide invaluable representation for clients at The Ferraro Law Firm.