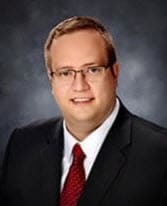 Joe is an associate in the law firm of Frank, Juengel & Radefeld, Attorneys at Law P.C. in Clayton, Missouri specializing in Federal and State criminal law. He is licensed in Missouri, the U.S. District Court Eastern District of Missouri, and with the U.S.C.A for the Armed Forces. Joe is committed to defending those who have been accused of crimes and works to obtain the best result for each individual client.

Joe attended law school at Washington University in St. Louis. After graduating law school and passing the bar, Joe joined the United States Army Judge Advocate General's Corp. Joe was one of a few of his JAG classmates selected to begin his career as a trial attorney. Following basic training Joe was stationed at Fort Polk, Louisiana as a Trial Counsel. While there Joe handled criminal cases ranging from minor offenses to first degree murder. Most of the cases he handled involved serious offenses, including sexual offenses. Based on his successful record at trial he was asked to serve in a dual role as Special Assistant United States Attorney for the Western District of Louisiana where he handled criminal matters involving civilians on base.

Following his tour at Fort Polk, Joe was stationed at Fort Leonard Wood, Missouri where he served a Defense Counsel. While there Joe represented hundreds of soldier's accused of offenses and obtained eight full acquittals for various clients in under two years. The cases ranged from attempted murder to driving under the influence. Most of the cases he handled involved those accused of sexually related offenses.

After leaving the Army Joe served as Assistant Prosecuting Attorney for Christian County, Missouri. While working as a state's attorney, Joe's docket primarily included sex crimes, crimes against children, and weapons offenses. Joe's work in Christian County also included cases such as domestic assault, drug and alcohol related offenses, and felony traffic offenses including DWI. Through these experiences Joe was able to see how the state builds a case, and what it takes to successfully defend a client against one.

In addition to his work on criminal cases, Joe also worked in civil litigation in the Springfield office of a prominent Kansas City based civil firm. These experiences gave him a good understanding of civil practice, and how often times civil and criminal issues overlap. If you need assistance in any legal matter related to or stemming from your case, we are here to help.

Let Frank, Juengel & Radefeld, Attorneys at Law assist you in the manner that you deserve to be represented.