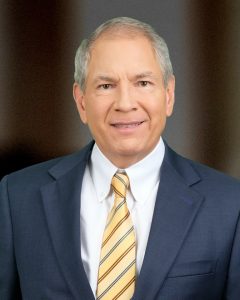 Founding Partner Lee Coleman is best described by two things: his accomplishments and his advocacy. It all began in 1978, when Lee earned his B.S. in Business Administration from the University of Kentucky. He then went on to earn a Juris Doctor from the University of Louisville, graduating in 1981. After obtaining his education, he was ready (and eager) to enter the legal field. He began as an Assistant County Attorney/Prosecutor in Bowling Green, KY, eventually moving up to become an Associate Attorney for a local attorney.

In 1984, Lee decided he had enough experience and enthusiasm under his belt to become a sole practitioner and, in 1985, he opened Hughes & Coleman Injury Lawyers with Partner J. Marshall Hughes. To date, founding Hughes & Coleman has been both Lee's greatest accomplishment and his biggest channel for advocacy. Every day for the past 35 years, Lee has been able to help thousands of people trade chaos for calm and return their lives back to a state of normalcy.

Even though Lee's legal career has been polished and time-tested, Lee never stops learning how to continuously better his firm for his clients. He constantly attends legal seminars and lectures across the nation in order to learn new and innovative ways to make Hughes & Coleman a leading firm in the industry. He's also worked with J. Marshall Hughes to found non-profit programs, such as Kids Are Special, a program designed to raise awareness in local communities about major safety issues and concerns. The program promotes the fingerprinting of children for identification and encourages smart biking habits through the sale of certified bike helmets. Each Hughes & Coleman office sells children's helmets for a fraction of the typical cost.

Outside of Hughes & Coleman, Lee loves staying as active as possible. When he's not in the judge's court, Lee can be found on the basketball court. He also enjoys golf, snow skiing and spending time with his wife, the Honorable JoAnn Spinks Coleman, and their three children and five grandkids.