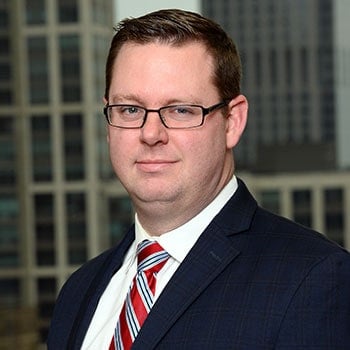 Since being admitted to practice law in Illinois, Mark has practiced in many areas of personal injury litigation including medical malpractice, premises liability and automobile and trucking negligence cases. Mark has successfully represented injured victims of negligence in numerous cases, many of which have resulted in outstanding results for individuals and their families. Mark is experienced and directly involved in all areas of personal injury litigation from the initial client consultation through trial. Mark has recovered millions of dollars on behalf of his clients including several individual results in excess of a million dollars. Mark is a member of the American Bar Association, Illinois Trial Lawyers Association and Illinois State Bar Association.

Prior to joining the firm, Mark clerked for the personal injury law firm of Goldstein, Fluxgold & Baron, PC from 2009 through 2010. In 2009, Mark served as a legal extern for the Honorable Samuel Der-Yaghiayan in the United States District Court for the Northern District of Illinois. In 2009, he also served as the courtroom coordinator for the Honorable Richard A. Stevens in the Circuit Court of Cook County – Child Protection Division.