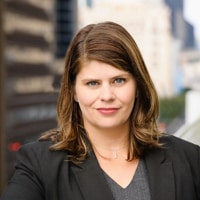 Vanessa J. Firnhaber Oslund is a partner at the firm. She has been fighting for justice for asbestos victims for over a decade. Vanessa takes equal pride in her zealous advocacy in the courtroom and her compassion for her clients. She takes a special interest in helping victims of “take-home” asbestos exposure who were exposed to asbestos through their parents’ or spouse’s work clothes.

Over her career, she has represented hundreds of mesothelioma victims and their families, achieving many victories for her clients, including many multi-million-dollar settlements and verdicts. She is passionate about obtaining justice for her clients in the legal system and holding corporations responsible for putting profits over people. She understands that bringing an asbestos claim is often her clients’ first contact with the legal system and can be intimidating. Accordingly, she takes special care to keep her clients informed and to ensure their interests are protected every step of the way.

Prior to representing asbestos victims, Vanessa served as counsel to the Washington State Senate advising senators on law and policy regarding consumer protection and insurance issues.

Vanessa spends most of her time outside work with her husband and two young daughters biking, watching ballet recitals, road-tripping, and cooking.

$4.25 Million award, among largest in Pacific Northwest, awarded to Douglas and Diane Everson in a case involving exposure to asbestos products.

$1.45 Million verdict for 84-year-old mesothelioma victim with one month of asbestos exposure on a merchant marine ship.

$6.9 Million in settlements for a 38-year-old mesothelioma victim exposed to asbestos through the work clothing of her father, a telephone repair worker, during childhood.

$3.9 Million in settlements for a husband and wife suffering from asbestosis and mesothelioma respectively. The husband was exposed to asbestos during his work as a machinist at Puget Sound Naval Shipyard and his wife was exposed when she washed her husband’s asbestos-laden work clothes.

$3.5 Million in settlements for a 69-year-old Navy machinist mate who, in addition to suffering asbestos exposure in the Navy, was exposed through the work clothes of his father, a Puget Sound Naval Shipyard worker, and while working as a boiler tender at a plywood mill.

$2.2 Million in settlements for an 89-year-old career electrician who worked at a Longview paper mill.