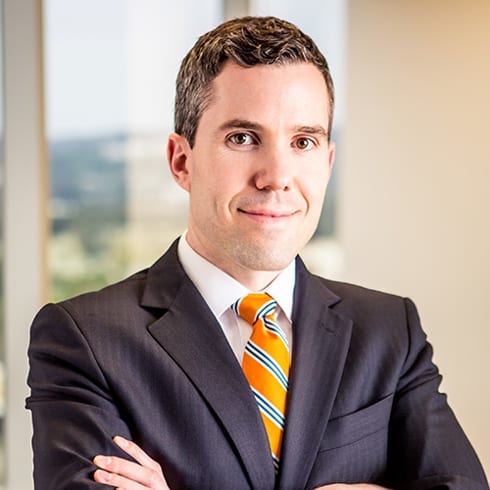 William Crawford Appleby IV is an attorney in the Los Angeles office of Baum Hedlund Aristei & Goldman. He focuses on complex law and motion matters, in-depth legal research and writing, and case strategy. Utilizing these skills, Crawford helps maximize case value by digging deep into both United States and foreign law to obtain the best outcome for Baum Hedlund’s clients. He contributes to cases at both the trial and appellate level by, among other things, drafting briefs, compiling and analyzing legislative history, tracking new or developing areas of law, exploring issues of first impression, evaluating analytical data, and monitoring the latest developments in legal technology. He concentrates his practice on transportation accidents, whistleblower cases, and qui tam claims.

Before joining Baum Hedlund, Crawford served for more than two years as a Law Clerk at the Los Angeles Superior Court. There, he acquired a broad range of experience in all aspects of civil litigation while drafting proposed tentative rulings and performing legal research and writing for many superior court judges. Crawford also served as a federal Judicial Extern for the Honorable R. Gary Klausner in the Central District of California during his first summer of law school.

Crawford honed his advocacy skills during law school when he was accepted into the Hobbs District Attorney Clinic where he conducted twenty felony preliminary hearings for the Los Angeles District Attorney’s Office. He also represented professional licensing boards in administrative hearings as an extern for the California Department of Justice under former Attorney General Kamala D. Harris.

In addition, Crawford served as a Senior Technical Editor for the Loyola of Los Angeles Law Review. While on law review, he published a comment on United States Supreme Court case Rehberg v. Paulk, which is cited in Witkin Summary of California Law and Federal Grand Jury: A Guide to Law and Practice.

In 2019, Crawford launched legal tech company rulings.law, a free, searchable database of California state court tentative rulings. This access-to-justice focused resource allows litigants to obtain valuable insights into the judge deciding their case by seeing how that judge has ruled in the past, what cases the judge cites, and why that judge rules the way he/she does. State court judges constantly issue tentative rulings in their cases, but they are not compiled in any freely accessible archive. Crawford solved this problem by creating rulings.law. Its purpose is to level the playing field between litigants who can afford to pay to see their trial judge’s prior rulings, and those who cannot.

In his free time, Crawford enjoys spending time with his wife Lauren and their son William, running, skiing, golf, and tennis. He ran the 2010 Los Angeles Marathon to raise money for Make-A-Wish Foundation®.

The National Trial Lawyers Top 40 Under 40

Certificate of Appreciation for service to the Licensing Section, State of California Department of Justice, Office of the Attorney General

Event: Webinar – “Write for Judicial Eyes Without Reinventing the Wheel!”

Selke v. Germanwings GmbH, 261 F. Supp. 3d 645 (E.D. Va. 2017) (Virginia court had personal jurisdiction over a German airline, involving Germanwings Flight 9525 from Barcelona, Spain to Düsseldorf, Germany, whose pilot committed suicide by crashing the plane into the French Alps and killing all 150 on board, because the airline sold its tickets to passengers that resided in Virginia through its authorized agent, United Airlines)