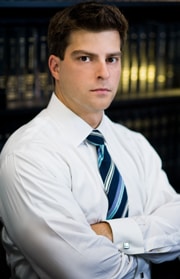 Brian T. Pakett works hard to achieve the goals of his clients while maintaining their constitutional rights. An energetic, aggressive, and experienced trial attorney, Mr. Pakett has devoted his career primarily to the defense of criminal matters, but he also maintains a general civil litigation practice. Mr. Pakett has represented clients with a wide range of criminal issues, including: DUI/DWI, violent crimes; drug crimes; sex crimes; white collar crimes; federal embezzlement, federal conspiracy; traffic matters and more. No case is too big or too small. Mr. Pakett's understanding of criminal law and his skill as a trial lawyer sets him apart and he has been regularly recognized as one of New York's top up and coming criminal defense attorneys.

While maintaining his own practice, Mr. Pakett began his career and continues to work Of Counsel to the Law Offices of Murray Richman, representing clients throughout New York State, including, New York County (Manhattan), Bronx, Brooklyn, Queens, Richmond (Staten Island), Westchester, Nassau and Suffolk Counties. Mr. Pakett's skill as both a trial attorney and criminal defense attorney is defined by his impressive track record of success. This success derives from Mr. Pakett's personal involvement in all aspects of his client's cases, from the investigation stage through disposition. Mr. Pakett understands the complexity and sensitivity of criminal matters and his career includes a great deal of experience in high profile and complex legal matters.

Mr. Pakett's interest in a legal career began even before law school and he obtained his Bachelor of Arts with a concentration in legal studies, history and journalism from the University of Delaware. While at the University, Mr. Pakett was Managing Sports Editor for the University's newspaper, "The Review." Mr. Pakett earned his law degree from New York Law School where he was a member of the Criminal Law Society. During his tenure at New York Law School, Mr. Pakett gained valuable experience working as a Legal Extern for the New York City Legal Aid Society and as a Legal Extern for the Honorable Justice Nicholas Figueroa of the Supreme Court of the State of New York, County of New York.

The Law Office of Brian T. Pakett is available for consultation 7 days a week and maintains a 24 hour phone service at (561) 318-0531. All consultations are free of charge.

United States District Court of the District of New Jersey