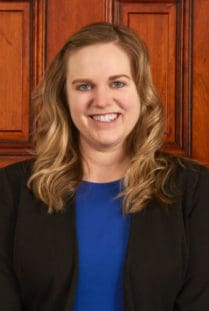 While in law school, Laura worked in her school’s Family Violence Clinic which allowed her to get into the courtroom early, and help victims of domestic violence and custody disputes. She was also a Note and Comment Editor of the Journal of Dispute Resolution, in which she was published in 2010.

After graduating law school in 2012, Laura joined the Public Safety Division of the Office of the Missouri Attorney General, focusing on habeas corpus and special prosecutions. She moved to Denver in 2013 and joined a large local personal injury law firm. While there, Laura represented hundreds of injured people and secured millions of dollars in compensation for them. Laura gained additional experience in personal injury law at a small firm before joining The Sawaya Law Firm in 2019.

Laura is passionate about standing up for those who cannot stand up for themselves, and providing injured people power against large insurance companies who seek to take advantage of them.

When she’s not working, Laura enjoys spending time with her husband and two dogs, often seen hiking the Colorado mountains or relaxing in one of Denver’s beautiful parks.

University of Missouri School of Law