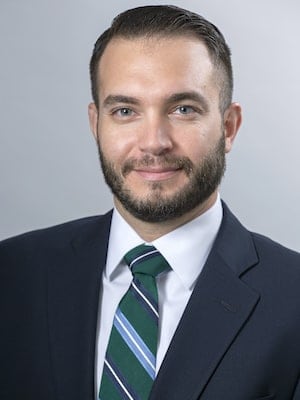 Matt has proven to be a skilled advocate for the severely injured. He has defeated summary judgment against a national big-box retailer in a premises liability case involving snow and ice, resulting in a large settlement at mediation, negotiated a large settlement against a national furniture manufacturer in a products liability case, obtained settlements for dog-bite victims under the Massachusetts Leash Law, and successfully brought numerous matters to plaintiffs’ verdicts in motor vehicle collision trials.

After graduating from law school, Matt worked at a prominent bankruptcy law firm in Boston before shifting his career to focus on plaintiffs’ tort claims. He became a decorated litigation associate with Gillis & Bikofsky, P.C., a leading personal injury firm in Newton, Massachusetts. There, he managed a robust caseload of sizeable personal injury matters for nearly a decade before bringing his talent and experience to The Injury Law Center.

Matt earned his Bachelor of Science degree from Boston University and his Juris Doctorate from Suffolk University Law School. While in law school, Matt served as an intern for both the Major Felony Bureau in the Suffolk County District Attorney’s Office and the Litigation Bureau at the Massachusetts Department of Revenue. During his final year, Matt represented the Commonwealth in criminal matters as a Student Prosecutor in the Suffolk County District Attorney’s Office in the Brighton Division of the Boston Municipal Court. Matt was an advocate on the Suffolk University Law School National Trial Team, where he competed in the American Association for Justice’s Student Trial Advocacy Competitions. He also served as a founding officer of Suffolk University’s Lebanese-American Law Student’s Organization.

A Boston native, Matt currently lives in Concord, Massachusetts, with his wife and two daughters. In his free time, Matt enjoys fishing, working on home improvement projects, practicing Brazilian Jiu-Jitsu, hiking, and biking with his family.

Matt currently sits on the Board of Directors of the Catholic Lawyers’ Guild of the Archdiocese of Boston.

Matt is licensed to practice law in the State of New Hampshire and the Commonwealth of Massachusetts.

$450,000 Dram Shop Liability – The client, a 28-year-old single mother, was struck by an intoxicated bar patron in the parking lot of a Massachusetts bar. The client suffered a fractured skull, subdural hematomas, subarachnoid hemorrhages, and traumatic brain injuries. The client sustained neuropsychological injuries as a result of her traumatic brain injuries. Additionally, the client suffered a loss to her earning capacity over the remainder of her future working years.

$235,000 Motorcycle Accident – The client was riding his motorcycle on Rt. 1 in Seabrook, NH, when the defendant, driving a work truck, carelessly and negligently pulled out of a parking lot to turn left onto Rt. 1 and cut into the client’s lane of traffic. Left with no choice but to try to swerve around the truck, the claimant crashed his motorcycle. As a result, the client suffered broken ribs, lacerations to his knee, and injuries to both shoulders requiring surgery.

$200,000 Motor Vehicle Accident Caused by Drunk Driver – The clients, a husband and wife, were struck by a drunk driver while out driving on a Sunday morning. The husband suffered a displaced left wrist fracture that required surgical fusion. The wife sustained a third rib fracture, a sternal fracture, severe bruising to her abdomen and legs, a severely lacerated right hand, and a sprained right wrist. This matter settled for the at-fault party’s insurance policy limits.

$125,000 Rear-End Motor Vehicle Accident – The client was rear-ended while waiting at a stoplight. As a result, the client suffered a vertebral disc herniation and nerve impingement. The client required steroid injections and eventually a microdiscectomy surgery. This matter was settled for the at-fault party’s insurance policy limits.

$120,000 Slip and Fall Accident – The client slipped and fell on snow and ice in the untreated and poorly lit parking lot of her apartment building when leaving for work. The client suffered a fractured ankle that required surgery and the placement of surgical hardware. Additionally, the client needed a walker during her rehabilitation from surgery. As a result, the client additionally suffered an overuse injury to her shoulder.

$100,000 Rear-End Motor Vehicle Accident – The client, a Massachusetts driver, was rear-ended while in traffic on Rt. 95 Northbound in New Hampshire. The client’s car was totaled. In addition, he suffered a concussion and an abdominal hernia from his seatbelt. The client required hernia repair surgery and physical therapy to treat his concussion symptoms. This matter settled for the at-fault party’s insurance policy limits.