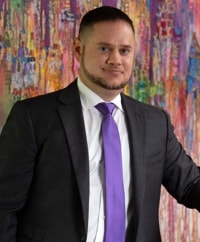 "Robert J. Boughter, the founder of Boughter Sinak, LLC, dedicates his life to the representation of people seriously injured or killed in accidents and on the job. He is known as “The Fighter” because of his aggressive and straightforward approach to representing his clients in and out of court. Mr. Boughter prides himself on being honest, tenacious and loyal. He has a vast range of experience, having successfully prosecuted almost every type of injury or death case imaginable – from trucking accidents to chemical explosions. Mr. Boughter was born in New Castle, Pennsylvania. He received his undergraduate degrees in criminology and Spanish magna cum laude from Indiana University of Pennsylvania in 1997. Mr. Boughter also studied at the Universidad de Valladolid, Spain and El Centro Biling̤ue in Cuernavaca, Morelos, Mexico. Mr. Boughter is fluent in Spanish. Following undergraduate school, Mr. Boughter served as a special agent with the Office of Inspector General-Commonwealth of Pennsylvania, where he investigated and prosecuted fraud in governmental agencies. Mr. Boughter had a 100% conviction rate for the cases he investigated.

Early in his career, Mr. Boughter was named among the “Top 40 Under 40” by The National Trial Lawyers and rated by “Super Lawyers” as a “Rising Star.” The Rising Stars list recognizes no more than 2.5% of attorneys under 40 in Indiana. Currently, Mr. Boughter has been selected by his peers as an “Indiana Super Lawyer”, an award presented to the top 5% of practicing attorneys in Indiana. Other accolades include “America’s Top 100 Attorneys,” “Top 100 Trial Lawyers” by The National Trial Lawyers, and Lifetime Charter Member of “Best Attorneys of America.” Mr. Boughter is also a member of the “Million Dollar Advocates Forum,” one of the most prestigious groups of trial lawyers in the United States. Membership is limited to attorneys who have secured million and multi-million dollars verdicts and settlements. Fewer than 1% of U.S. lawyers are members. Mr. Boughter has obtained multiple 7-figure recoveries on behalf of his clients. While headquartered in Indiana, Mr. Boughter represents clients nationally, including Florida, Georgia, Pennsylvania and Ohio.

Outside of lawyering, Mr. Boughter has a passion for animals, and has five dogs and a horse of his own. Mr. Boughter routinely supports and donates to animal rescue groups locally and around the country. Mr. Boughter rescued Siegfried the Great (“Ziggy”), the law firm’s regal German-Shepherd mascot, all the way from Los Angeles, CA. Ziggy is admired by all and often sits in on depositions and mediation.

I want to thank Boughter Sinak for their generosity and unwavering support of animals in need. Boughter Sinak not only helps organizations such as the Boys and Girls Club, YMCA, the Women's shelter, and local pet charities, but their reach extends all the way to Los Angeles, California. Robert Boughter adopted my foster dog Teddy Bear. When I adopt any of my foster dogs to their forever home, I am very careful and fully vet the person adopting. What I discovered about Robert is his incredible compassion and his devotion to help the helpless and the underdog, whether it be animal or human. The first dog he adopted from the Rescue I volunteer with was a dog that had a long history of seizures and his former owners wanted to have him put to sleep. Thankfully, Robert stepped in and gave Siegfried his forever home and has been by his side through his illness, providing him with the very best care. After his first rescue dog was stabilized, Robert wanted to adopt another “special needs” dog, because he knew there were harder to find homes for. That’s when he adopted my foster Teddy Bear. Teddy was run over by a car, had a crushed pelvis and broken bones. He has healed from his initial injuries, but will most likely have orthopedic issues for the rest of his life. That didn’t faze Robert in the least. Not only has he given an amazing life to these “underdogs”, but he has generously donated funds so the rescue can save more dogs who are at risk of being euthanized at the city and county kill shelters. I know without a doubt that if I ever need a personal injury attorney, Robert will be my first call because he always goes above and beyond to help the helpless and his passion to do what is right is unsurpassed.