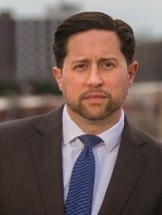 Adam grew up in a military family that was stationed in Germany, Okinawa, and Hawaii, among other places. He has made Springfield his home since earning his law degree in 2007 from the University of Missouri-Columbia where he served on the Missouri Law Review. Adam began his career with Hall Ansley, P.C. immediately after law school and he has been zealously advocating for his clients ever since. His experience lies in civil trial practice, focusing in the areas of medical negligence, personal injury, employment law and consumer law He possesses experience in all stages of litigation, including motion practice, discovery, and jury trials.

Adam is a former Board Member of the Springfield Metropolitan Bar Association (SMBA), and currently sits on the Board for the SMBA Foundation. He is a 2017 Super Lawyer ‘Rising Star’ in the area of medical negligence. In 2011, Adam was elected by his peers to represent District 11 (encompassing nine Missouri counties) on the Missouri Bar’s Young Lawyers’ Section Council, and served in that capacity until 2017. In 2013, Adam served as Chair of the SMBA Law Day Committee, and in 2009, the Missouri Bar selected him as one of only 18 attorneys statewide to participate in the 2009-2010 Missouri Bar Leadership Academy.

In his free time Adam enjoys spending time with his family (which includes his wife, Stacy, and son, Max).