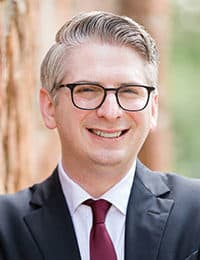 Andy West is an attorney within the ever-growing universe of The Lanier Law Firm Asbestos Resolution Team. Prior to coming aboard with the firm, Andy had been working with our firm on issues related to asbestos bankruptcy claims for several years as a solo practitioner. This journey has given Andy a unique perspective of viewing a client’s needs at The Lanier Law Firm from the outside and the inside. It tells you something when an attorney is so good at their job that another firm comes along and talks him into leaving his solo practice behind to join their team. Yes, Andy is very good at his job of navigating the often torrential waters of asbestos bankruptcy. Because of this, our clients win.

Andy was admitted to the State Bar of Texas in 2011 and has been qualified as a mediator in Texas (including cases affecting the parent-child relationship) since 2010. His well-rounded background has made him immediately irreplaceable to the team as well as to our clients who depend upon his significant expertise.

Andy went on to earn his Juris Doctor from South Texas College of Law in Houston, Texas in 2011. As a law student at South Texas, he served a staff member of Currents: International Trade Law Journal, acted as mediator in the school’s Mediation Clinic, and was awarded the Pro Bono Honors Certificate, proving he not only has a heart for his profession but also for his community.

He is a native of Beaumont, Texas and has resided in Houston for more than a decade. He is an avid supporter of Liverpool Football Club and the Houston Rockets.