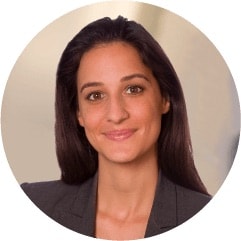 Antoinette (Toni) Schlapprizzi is a trial lawyer at Schlapprizzi Attorneys at Law, licensed in Missouri and Illinois. She believes that every human being has a unique dignity that must be honored and respected, and through her work as a trial attorney, she aggressively defends and protects this unique dignity each and every day. Battling for truth on behalf of those who have survived serious injury and the loss of a loved one is at the core of who Toni is.

She received her undergraduate degree at Tulane University, where she played Division I soccer as a central defender. After riding the bench her freshman year, she earned a starting spot, and remained a starter on her team’s defensive line until her career ended. She went on to graduate from Washington University School of Law. Since then, she’s been defending the survivors of serious injury and wrongful deaths in both state and federal courts in Missouri and Illinois alongside her brother, Craig, and her father, Don.

Certainly what drew Toni to the law was her father, Don Schlapprizzi. His conviction, moral code, and talent seep from every pore of his being to serve injured people and their families decade after decade. As a little girl, her father would tell her the stories of his clients and the courtroom, and she would pray for those people every night before bed. Toni considers her father to be one of the greatest mentors, teachers, and men she has ever known.

“I have a heart and drive to serve our clients; I learn from them every day; they are gifts in my life; I work as hard and smart as I possibly can for them.”

“A singular person is secured an equal playing field against powerful industry – whether insurance, government or business. Juries ensure that the each of us will have a fighting chance against the powers that be.”

Toni continues the legacy of Schlapprizzi Attorneys at Law with her father, Don, and brother, Craig. She feels blessed to be a plaintiffs’ trial lawyer, and has great esteem for the legal profession and the courageous jurors, past, present, and future, in our community.