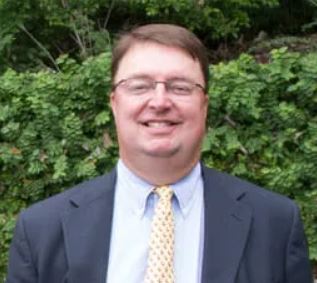 Chip Evans is a partner at Evans & Herlihy. Chip brings to the firm more than 20 years of experience as a trial lawyer representing Plaintiffs. It is the desire to help individuals, not corporations, that attracts Chip to this side of the docket.

“It’s pretty easy for a large insurance company to attract a stable of top-flight lawyers. It is the ordinary person that really needs help finding their way through the increasingly complex tort system that we have today.”

Chip grew up in Dallas, Texas, and attended Southwestern University in Georgetown, Texas, as an undergraduate. Chip graduated from Southwestern in 1994 with a degree in political science and next attended law school at St. Mary’s University School of Law, graduating in 1997. Following a stint practicing medical malpractice defense with Burford & Ryburn, L.L.P. in Dallas, Chip joined his father-in-law, Guy Fisher, to form Fisher & Evans, L.L.P. in 1998. In 2008, Fisher & Evans, L.L.P. added Jeff Edwards and Sally Metcalfe to become Evans Edwards, L.L.P. In 2011, Chip founded The Evans Law Firm. The Evans Law Firm has since added partner Scott Herlihy and today operates under the flag of Evans & Herlihy.

“Family is important to me. I got my start in this career through family and consider my clients to be part of my extended family. The work that I have been able to do on behalf of families is important to me, and I enjoy talking to my clients many years after their case has settled and hearing about the positive impact we were able to make on their lives,” he says.

Chip represented the family of a teenager who was seriously injured in an automobile accident. There were various competing interests vying for the several insurance policies involved. Chip was able to secure a full policy limits settlement for the young man and his family in short order and place the bulk of the settlement funds in a trust to pay for the young man’s future college education.

““I ran into the young man about 10 years after I had represented his family — in the airport, of all places. We recognized each other and began talking. He told me that he had recently finished up his Master’s degree and was headed to Europe. He was able to take a few months off and do this because his education was funded solely by the settlement we achieved. I love times like this because it shows how we can take a very negative situation and turn it into something positive for people.”

Chip is board certified in Personal Injury Trial Law by the Texas Board of Legal Specialization. Chip is a member of the State Bar of Texas, the Texas Trial Lawyers Association, the Capital Area Trial Lawyers Association, and the Austin Bar Association. He is licensed in all the Texas State Courts and in the Western District of Texas Federal Court. Chip is also licensed in all the Arizona State Courts as well as the State Courts of Colorado. He is a member of the Million Dollar Advocates Forum, the American Board of Trial Advocates and many other honorary legal organizations.

Chip has a wide variety of hobbies including golf, fishing, and attending sporting events but he is always looking to expand his interests. Recently, Chip served as a consultant on Blame and The Three Beths, two thrillers by noted author and good friend Jeff Abbott and he’s sure that readers will have as much fun reading it as he did work with Jeff. Visit Jeff Abbott’s website to learn more.

Chip and his wife have lived in Central Texas for 29 of the last 30 years. They have two children. Chip enjoys travel, golf and outdoor activities with his family in his spare time and serves as a volunteer in many community organizations, including work with Southwestern University in Georgetown, Texas.