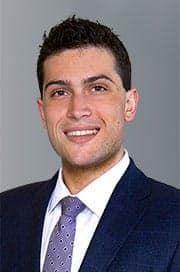 Daniel M. Seiden’s reputation as a skilled litigator has been recognized by well-respected independent attorney review organizations. Mr. Seiden has been selected to the ‘Rising Stars’ list by Super Lawyers, an honor reserved for attorneys that exhibit excellence in practice. Only 2.5% of attorneys in the New York Metro area receive this distinguished award. Mr. Seiden was also selected to The National Trial Lawyers: Top 40 Under 40, an organization exclusively composed of the top trial lawyers from each region who are below the age of 40. Membership to this organization is granted only to the select few of the most qualified attorneys who demonstrate superior qualifications of leadership, reputation and results, and it is based on a thorough multi-phase objective process which includes peer nominations.

After working at the Office of the Attorney General for the State of New York, and assisting with the prosecution of businesses and individuals engaged in fraudulent, deceptive, or illegal trade practices, Mr. Seiden served as a judicial intern for the Honorable George J. Silver of the New York County Supreme Court. This rare opportunity to learn about the inner workings of the court system from the judiciary’s perspective also provided the foundation for Mr. Seiden’s success in the courtroom.

For the next seven and a half years, Mr. Seiden worked at a highly regarded personal injury firm in New York City. He gained tremendous experience in and out of the courtroom and earned a reputation as a gifted negotiator and litigator. While at the firm, Mr. Seiden was part of the team that obtained exceptional verdicts and settlements in numerous cases including the following:

• $7,300,000 for construction worker who suffered an arm amputation when he fell from an unsecured ladder

• $5,850,000 for a client that required multiple spine surgeries as the result of a ceiling collapse

• $3,000,000 for a worker that was injured when a ladder and scaffold collapsed beneath him

• $2,900,000 settlement for a woman who required bilateral total knee replacements as the result of an automobile accident

• $2,300,000 for a mechanic that sustained facial and vertebral fractures while performing repair work

• $2,200,000 for a man who suffered serious neck injuries as the result of a rear-end car accident

• $1,750,000 award for a retired police officer that suffered spinal and knee injuries as the result of a car crash

• $1,750,000 award for rear-end accident victim struck by a company-owned car on the Cross Island Expressway

• $1,600,000 for a man that sustained severe back injuries as the result of a side swipe automobile accident

• $1,500,000 settlement for an injured passenger on the commuter train that crashed into Hoboken Terminal during morning rush hour on September 29, 2016

• $1,500,000 for a woman who was rear-ended by a tractor trailer and sustained low back and shoulder injuries

• $1,400,000 for asbestos worker who suffered leg and back injuries after scaffold fall

• $1,325,000 settlement for a man that suffered serious neck and back injuries as a result of a motor vehicle accident

• $1,300,000 settlement for pedestrian struck by a vehicle while she was crossing the street with the walk sign in her favor

• $1,225,000 settlement for a Suffolk County man who suffered serious spine injuries as a result of a motor vehicle collision

In 2022, Mr. Seiden brought his talent and ability to achieve extraordinary results to Seiden & Kaufman. As a partner, he will continue his dedication and commitment to obtain the best possible outcome for the firm’s clients.

Please give Mr. Seiden a call if you have been injured in an accident. He will answer all your questions without any obligation.