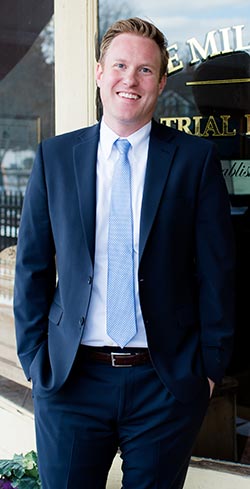 David J. Dickens is an attorney with The Miller Firm where he has worked since 2006. His practice focuses on products liability, mass torts, drug and medical device litigation, complex class actions, medical malpractice, and personal injury litigation.

Dave was honored by the National Trial Lawyers organization for his efforts in the Lee Johnson Trial by receiving the 2019 Trial Team of the year award for his part as co-lead counsel in the first Roundup case to go to trial. As an attorney with The Miller Firm, Mr. Dickens oversaw the day-to day operations of the firmâ€™s Zyprexa, Seroquel, Kugel Mesh and Byetta litigations and was a key member in the firmâ€™s successful Avandia and Actos litigation teams. Mr. Dickens also served as the managing attorney in the State of Montana v. Eli Lilly and Co. Zyprexa litigation, which resulted in a multi-million dollar settlement for the State. In addition to pharmaceutical litigation, Mr. Dickens has been successful in certifying nationwide class actions against major retail corporations and has settled numerous medical malpractice actions for clients within the Commonwealth of Virginia. Although active in a number of cases, Mr. Dickens currently is heavily involved in the firmâ€™s efforts to win compensation for the victims of terrorism. Mr. Dickens is currently a member of the Plaintiffsâ€™ Steering Committee in the Fosamax femur fracture litigation centralized in the District of New Jersey.

Mr. Dickens graduated from James Madison University with a Bachelor of Arts in Political Science and Public Administration. He earned his law degree from Suffolk University Law School where he graduated with honors.

Mr. Dickens is licensed to practice in Virginia and the District of Columbia as well as the United States District Court for the Eastern District of Virginia.