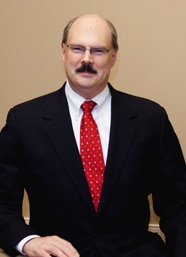 David W. Hill, a native Tennessean born in Knoxville, spent ten years with Tennessee's Secondary School System prior to becoming a lawyer. During his law studies, he served as president of the Public Interest Law Society. Mr. Hill devotes his practice to personal injury, workers' compensation and mass tort cases and chairs the firm's Mass Tort Practice Group. Mr. Hill was listed as a Super Lawyer in 2013 and 2014 by the Law and Politics Magazine and recently named in the Top 100 Lawyers in Tennessee and Top 50 Lawyers in Memphis. He is also an accomplished musician, playing both the clarinet and saxophone.