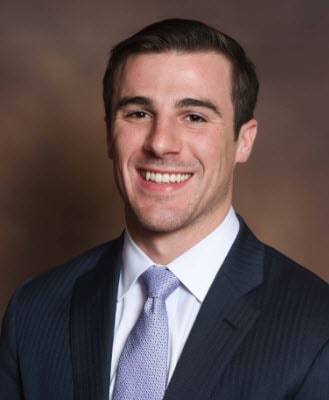 Dominic LoVerde is a trial attorney and associate with Motherway & Napleton, where his practice focuses on plaintiff’s personal injury litigation. He joined Motherway & Napleton’s office after practicing complex litigation representing investors and consumers who were victims of corporate fraud. He also previously served as a judicial law clerk to the Honorable Samuel Der-Yeghiayan in the U.S. District Court for the Northern District of Illinois.

Dominic has extensive experience in litigation, pre-trial motion practice, and navigating the courtroom. In 2019, Dominic was selected to Illinois Rising Stars by Super Lawyers, an honor given to no more than 2.5 percent of the lawyers in the state. In 2018 and 2019, Dominic was also selected to Illinois Emerging Lawyers by Leading Lawyers, a distinction that recognizes Dominic as being amongst the top two percent of lawyers who are age 40 or younger. He has also published several articles regarding personal injury, complex litigation, and trial techniques.

Dominic is actively involved with the Federal Bar Association, Illinois State Bar Association, Chicago Bar Association, Justinian Society, and Lawyers Assistance Program. He also takes pride in his robust pro bono practice representing victims of civil rights claims and representing individuals through Chicago Volunteer Legal Services. His compassion for helping people extends beyond the courtroom, as he is actively involved in several community and charitable organizations in the Chicago area such as Mercy Home for Boys & Girls, Special Olympics Chicago, Misericordia, and the Boys & Girls Club.

Dominic was born and raised on Chicago’s South Side. He graduated from St. Ignatius College Prep and then attended the University of Dayton where he graduated with a Bachelor of Arts degree, cum laude, in political science, economics and pre-law. He obtained his law degree from Loyola University of Chicago School of Law where he was President of the Student Bar Association, senior editor of the Consumer Law Review, and President of the Justinian Society of Lawyers. He also externed for a Cook County Judge and Federal Magistrate Judge, worked for several law firms, and was a research assistant for Professor Richard A. Michael. Dominic delivered Loyola’s commencement speech at graduation and received Loyola School of Law’s Class of 2016 Leadership, Service, and Public Interest Award.