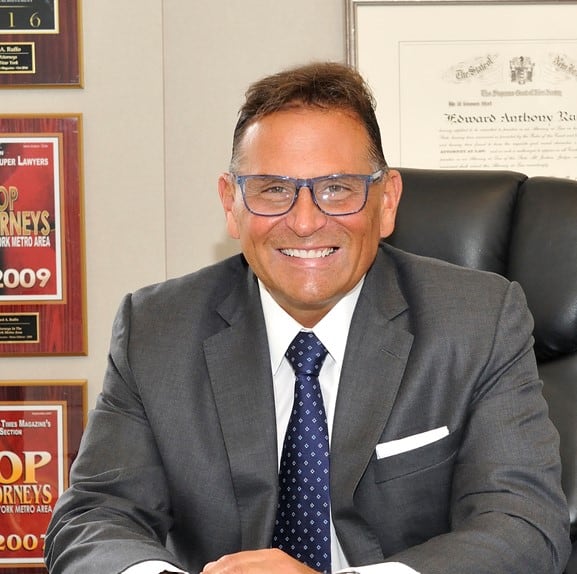 Mr. Ruffo’s extraordinary results speak for themselves. He started trying cases within weeks after his admission. He was initially focused on product liability litigation where he litigated substantial matters against Toyota, Ford, GM, Dow Corning, and many other major manufacturers. He then added medical malpractice to his expertise by learning medicine literally word by word. Mr. Ruffo recalls, “The time came when our practice started to take on many substantial matters of medical malpractice. I volunteered to handle those cases and had to learn how to read a medical record on a case-by-case basis. This was before GOOGLE so all I had was a medical dictionary. Over time I was able to understand the records, in some cases better than the doctors involved in the case” Accordingly, Ed went on to obtain numerous medical damage awards including a $12 million settlement for injuries sustained by a child at birth, a $12 million settlement for injuries sustained by an adult after surgery, and a $9 million settlement for injuries sustained by a child following poor emergency care.

His excellence within the legal field has not gone without recognition. Mr. Ruffo has been regularly featured in the New York Jury Verdict Reporter for his recoveries on behalf of those lost or injured due to the negligence of others. Accordingly, he has been annually ranked as a Top 10 and Top 100 Trial Lawyer by numerous professional societies including The National Trial Lawyers Association and Super Lawyers. He has also been distinguished as one of Americas Top 100 Personal Injury Lawyers, a top 100 SuperLawer and Best Lawyer in U.S. News and World Report. His proven track record of success has earned him membership on the Legal Referral Service Panel of the New York City Bar Association where he serves as a member of their Medical Malpractice Committee. In addition, he was awarded the rank of AV Preeminent by Martindale Hubbell, signifying the highest diction bestowed upon an Attorney for his legal ability and ethical standards.

Mr. Ruffo’s accomplishments and commitment towards law reach far beyond his work at RGRP. He has been nominated and served on the Board of Directors of the New York State Trial Lawyers Association for the past several years. Likewise, Mr. Ruffo has lectured to continuing legal education programs on topics surrounding Personal Injury Litigation and authored several articles concerning various aspects of trial advocacy.

Mr. Ruffo attended Columbia College, where he majored in Political Science and was placed on the Dean’s List for his excellent academic record. He then went on to receive his law degree from the St. John’s University School of Law, where he focused his studies on Civil Litigation, Trial Practice, and Injury Law. During his time at St. John’s, Mr. Ruffo was involved in the Moot Court Competition and Civil Trials.

Mr. Ruffo was inspired to become an Attorney in order to help people who otherwise might be unable to have their day in court and obtain justice. Mr. Ruffo describes his sworn commitment to his clients as: “I will do everything possible to win their case and to obtain the highest measure of compensation allowed by the law. That’s why they chose me or at least the reason they should have chosen me for representation”.

Mr. Ruffo currently resides in Westchester County, NY with his wife Lauren, daughter Victoria, and son Harrison. He is an active member of the local school foundation, community giving fund, and a proud supporter of his local first responders. Education

Edward has been afforded Life Achievement and Charter Membership in several pre-eminent organizations including Distinguished Judicial Advocates, America’s Top 100 Attorneys and Lawyers of Distinction and is a member of the following legal associations:

The American Association for Justice

American Board of Trial Advocates 2015- present

Medical Malpractice Committee Association of The Bar of NYC, 2015 - Present

$9,000,000 after structured settlement for a child with a hand injury after an improperly treated fracture.

$5,000,000 for a child with neurological impairment after an undiagnosed viral illness.

$3,500,000 for failure to diagnose and treat post- operative bleeding.

$3,000,000 for a lady with partial leg amputation after failure to diagnose a blood clot.

$2,200,000 for a lady sustaining a cardiovascular injury during heart surgery.

$2,000,000 for workers burned as a result of improperly labeled floor polish.

$1,500,000 for a gentleman sustaining visual disturbance after gland surgery.

$1,175,000 for the estate of an elderly man who lost his battle to untimely diagnosed prostate cancer.

$1,050,000 for an elderly lady with complications after carotid artery surgery.