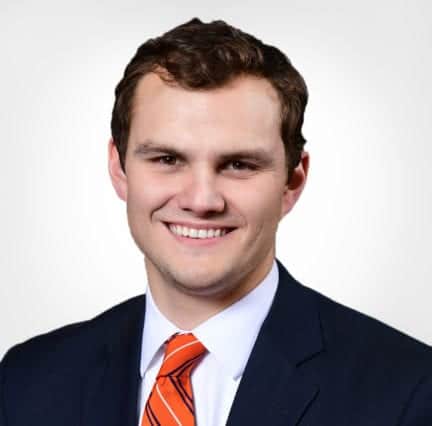 Gabriel Snyder is an attorney focusing on injury and workers compensation law. In addition to working with clients who have been injured, Gabe advocates for landowners whose property has been taken by the State of North Carolina through eminent domain.

Gabe knew from the time he was a child that he wanted to be an lawyer. He grew up watching his father help others through his law practice which inspired Gabe to pursue a career in law as well. A car accident that left him in critical condition shaped his passion to help injured people. As a result of the car accident, he was placed in a medically-induced coma, underwent 5 surgeries, and spent a month in the hospital recovering. He had to learn how to walk again and understands first hand how difficult it is to recover from serious injuries. He chose personal injury and workers compensation as areas of law in which to focus because of his empathy for those who have been seriously injured. He believes he can offer help in ways they may not even know they need.

Gabe earned his Juris Doctor from Campbell Law and Bachelor of Science in History (Pre Law) from Campbell. After graduating law school, he joined Snyder Law where he worked alongside his father practicing personal injury, family and criminal law. In his first year of practice, he successfully argued in front of the US Court of Appeals for the 4th Circuit.

Gabe met his wife, Audrey, during undergraduate school at Campbell and then attended Campbell Law together. After they were married, they decided to return to Gabe's hometown of Greensboro to pursue their legal careers. He enjoys spending time with his family and his church community. His hobbies include golfing with friends and hunting.