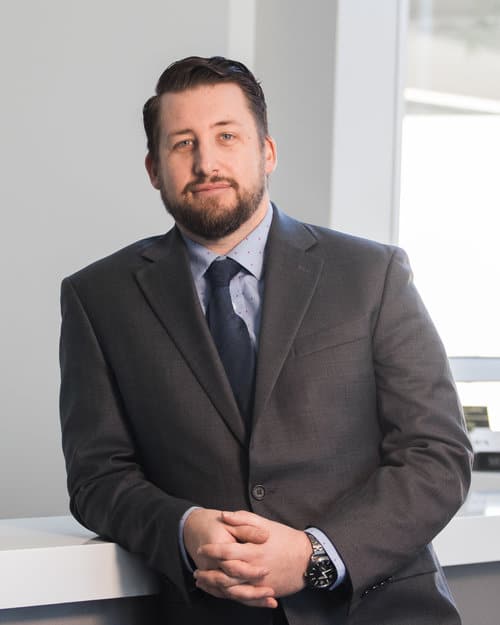 Hank was born and raised in Nevada and he is thrilled to be practicing law in the city he grew up in. He has a bachelor of science in Pharmacology from UC Santa Barbara, with a minor in History and a Leadership Certificate. While at UC Santa Barbara Hank was awarded the prestigious University Service Award from the Chancellor of UCSB for his outstanding university service.

After graduating from UCSB, Hank helped coordinate the research for a major university spine surgeon in Los Angeles and in doing so co-authored more than ten published, peer-reviewed scientific papers. While working in Los Angeles, Hank earned an MBA from Loyola Marymount University.

After earning his MBA, Hank ultimately decided to attend law school at UC Irvine School of Law. While attending law school, Hank externed for Associate Justice William Bedsworth of the California Fourth District Court of Appeal, Division 3 and the Honorable Mark S. Wallace in the Central District of California Bankruptcy Court. Based on his superior performance as an extern, after graduation Hank clerked for Judge Wallace.

Throughout his extensive tenure as a student, Hank worked every summer as a beach lifeguard in Huntington Beach. His passion and enthusiasm for lifeguarding earned him the Rookie of the Year and the Most Inspirational Lifeguard awards.

After his clerkship, and anxious to try cases, Hank joined a boutique law firm in Sacramento and aggressively pursued wrongful foreclosure and personal injury cases. In his first year at that firm Hank uncovered a case with potential and built it up in federal court to the point where the parties agreed to a multi-million dollar settlement on the eve of trial.

Hank is excited he finally has a chance to practice law with his mentor, Phil Hymanson.

U.S. District Court for the District of Nevada

U.S. District Court for the Eastern District of California

U.S. District Court for the Northern District of California