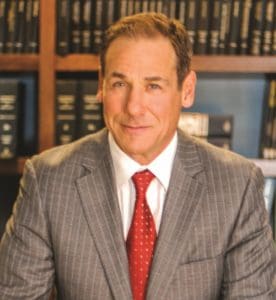 Jeff S. Korek joined Gersowitz, Libo and Korek, P.C. in 1992 as partner and trial attorney representing victims of medical malpractice and construction accidents. Known for his meticulous preparation and dedication to his clients, he has obtained substantial verdicts.

Since 2006, Jeff has been recognized in both Best Lawyers in America and Super Lawyers for personal injury and medical malpractice. Jeff was named as Best Lawyer's "Lawyer of the Year" in 2016 for Personal Injury Litigation in New York City. In 2018, the Litigation Counsel of America inducted him into the Trial Lawyers Honorary Society. He is routinely described as "powerful" and "influential" by publications such as the New York Times and Crain's New York Business.

Since 1999, Jeff has been appointed by four consecutive presiding Justices of the New York State Appellate Division, Second Department, to its Committees on Character and Fitness.

Jeff's dedication to the community is reflected in his having been a founder and active member of "The Gardiner Foundation," a non-profit started in the South Bronx to assist those in need by providing financial and emotional support to community youth.

Bronx River Parkway Design Defect Case involving the death of 5 young men and a child on their way to a basketball tournament. In it's 13th week of trial, the case resulted in an $18.5 million settlement.
Pelham Bay Landfill case representing 12 families whose children were stricken with Acute Lymphocytic Leukemia due to illegal dumping by major corporations and the US Army in a NYC landfill. The litigation resulted in a $12 million dollar settlement.