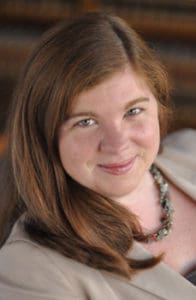 Attorney Jennifer L. Alesio is a shareholder at Simmons Hanly Conroy in the San Francisco office. She focuses her practice on mesothelioma and asbestos-related cases, helping injured workers and their families secure the justice they deserve.

In the 10 years Jennifer has practiced law, her tenacity in the courtroom and empathetic approach to clients has resulted in hundreds of millions of dollars in verdicts and settlements for her clients.

It’s my job to tell the stories of the workers and families who have been so irrevocably impacted by the harm caused by these companies,” Jennifer said. “The best part of this job is being able to meet with a sick worker or a mourning family and tell them that we achieved some measure of justice on their behalf.”

Jennifer’s clients can expect her to be a true champion for them during the entire legal process. In her role at Simmons Hanly Conroy, Jennifer’s responsibilities include working in conjunction with trial teams to build cases designed to go to verdict and achieve the best possible outcomes for clients. While Jennifer’s command of the legal landscape contributes greatly to her success, it’s not the only trait that makes her invaluable to clients.

“Trials can be emotional and intimidating experiences for many people. I think one of the first jobs of a trial attorney is to be the person who clients trust to take all of that fear, anxiety or worry off their shoulders and put it on my own,” she said. “That is as much a trial attorney’s job as a surgical cross-examination or a barn-burning closing argument. I tell every client before a trial that they are the witness that the defense is most afraid of, that all they need to do is tell the truth, and that the rest of the worrying is my job.”

Jennifer takes this philosophy to heart and puts it into practice with every case she tries.

“Jurors and clients can spot inauthenticity miles away,” she said. “When I tell a client to put their worries on my shoulders, that’s not just a thing I say. I use that trust as fuel to make sure I am never outworked.”

While Jennifer realizes the gravity and emotional weight that comes with the cases she works on, she also respects the positivity that comes with “fighting the good fight.”

“One of my favorite quotes is from E.B. White,” she said. “I’m paraphrasing, but the gist is, ‘I wake up every morning determined to both change the world and have one heck of a good time. Sometimes this makes planning my day difficult.’ I’ve found that the work I do doesn’t make planning the day that difficult because fighting the good fight with a talented team can be a heck of a good time, and, in small, but very real ways, it changes the world.”

Jennifer is a skilled legal advocate for her clients and has secured impressive and continuing results for her clients. During her legal tenure, Jennifer has served as trial attorney in several jury trials and secured more than $100 million in verdicts on behalf of individuals and families harmed by asbestos. In addition, Jennifer has served as trial counsel on countless cases that have cumulatively resolved for millions of dollars before verdict.

Three of her key verdicts include the following:

In August 2019, Jennifer continued her verdict streak when she, along with Shareholder Daniel Blouin, secured a $34 million verdict in Los Angeles County against Ford Motor Co. This monumental result against one of the nation’s largest auto manufacturers was on behalf of a retired mechanic, Arthur Putt, who was exposed to asbestos while replacing brakes at California and Indiana gas stations in the 1970s and 1980s. The verdict was ranked on the Daily Journal’s “Top California Verdicts for 2019” and was listed as the “Largest Product Liability Verdict of 2019” by The Recorder.

In August 2017, Jennifer represented Robert and Bonnie Sprague in Portland, Oregon. Robert was exposed to asbestos-containing insulation on ships while serving in the Navy from 1960 to 1964. While working as a pipefitter from 1965 to 1987, he came into contact with asbestos-containing gaskets and packing material made by John Crane, Inc. After a three-week trial and two days of deliberations, a jury returned a $5.4 million verdict in favor of the Spragues. The verdict included punitive damages in the amount of $3 million.

In October 2014, Jennifer represented Robert and Linda Whalen against John Crane, Inc., in a six-week trial in Alameda County, California. Robert served 26 years as a U.S. Navy machinist and nuclear inspector who worked on nuclear submarines, where he worked with asbestos-containing products. He was diagnosed with pleural mesothelioma in December 2013. The jury awarded a total of $70.861 million to the couple for economic and non-economic damages. In addition to these victories in the courtroom, Jennifer has litigated hundreds of other cases against some of the nation’s largest corporations and the scientists they hire to defend them. On a daily basis, she secures significant settlements for the firm’s clients and their families in these additional cases before a trial or verdict is warranted.