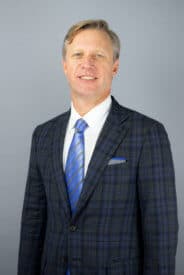 Jim M. Perdue, Jr. is a named partner at Perdue & Kidd, with a national practice focusing on trying lawsuits, from cases involving defective medical products and pharmaceutical liability claims to catastrophic injuries of all types. He is Board Certified in Personal Injury Trial Law by the Texas Board of Legal Specialization and Medical Professional Liability by the American Board of Professional Liability Attorneys. He currently serves on the Rules Advisory Committee of the Texas Supreme Court. Jim Perdue Jr. is both an Advocate in the American Board of Trial Advocates and Fellow in the International Society of Barristers. Mr. Perdue is listed among the “Top 100 Attorneys in Texas” in Texas Monthly by Thomson Reuters, where he has been named a “Texas Super Lawyer” since the award was created 11 years ago. He is also named in “The Best Lawyers in America” (Woodward/White 2006-15) for Plaintiff’s Personal Injury practice.

Jim Perdue Jr. has tried over 30 personal injury cases to jury verdict, including multi-million dollar verdicts for cases involving pharmaceutical liability, workplace injury, and medical malpractice. This includes his $27.6 million dollar verdict against Boston Scientific, listed as one of the largest product liability verdicts of 2014 by the National Law Journal. Jim Perdue Jr. has spoken at over 100 legal seminars and published on a wide range of topics, from trial techniques to tort law. He has made appearances on Good Morning America, Court TV, and local television as a legal commentator on civil justice legislation, automotive safety, and product liability law.

Mr. Perdue serves on the Boards of TIRR Foundation, which is the charitable research arm of TIRR Hospital in Houston, Texas, St. Paul’s United Methodist Church Foundation (Houston); and the Silver Spurs Alumni Association. Jim Perdue Jr. is a past director of the Texas Lyceum and Past President of the University of Houston Law Center Alumni Organization. He and his wife Nicole have three sons.