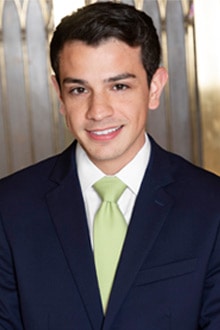 John’s professional legal career began in the midst of the successful defense of a federal criminal trial with allegations of bribery and money laundering. During this trial, and once passing the Texas Bar Exam, John was sworn in to the practice of law by the Honorable David Alan Ezra, the sitting trial judge. John’s practice focuses on state and federal criminal litigation, criminal appeals, and post-conviction writs of habeas corpus. John is a member of the Texas Criminal Defense Lawyers Association and the San Antonio Criminal Defense Lawyers Association.

John earned his undergraduate degree from the University of Texas at San Antonio in 2015, receiving a Bachelor of Business Administration with the honor of graduating Magna Cum Laude. During his time at St. Mary’s University School of Law, John served and contributed to The Scholar: St. Mary’s Law Review on Race and Social Justice on Vol. 19 as a staff writer and the Vol. 20 Editorial Board as an Associate Editor. Under Cynthia E. Orr’s guidance, John spearheaded the 2017–2018 revision of the Texas Annotated Code of Criminal Procedure and Texas Penal Code printed and published by the Texas Criminal Defense Lawyers Association.