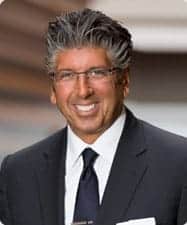 From 2004-2022 John N. Zervanos has been honored each year by his peers as a Pennsylvania “Super Lawyer” by Philadelphia Magazine in the area of Personal Injury, a distinction limited to the top 5% of attorneys in this state. He has been named a Pennsylvania Super Lawyer in each year the list has been published. John N. Zervanos was named one of the top 100 trial lawyers in Pennsylvania by the National Trial Lawyers Association from 2010 to 2017 and in 2018 was also named one of the top 25 medical malpractice trial attorneys in the State of Pennsylvania by the National Trial Lawyers Association. In 2007 he was named one of the “Leading plaintiffs lawyers in America” as published in Lawdragon. Mr. Zervanos was recently nominated and is now a member of the National Association of Distinguished Counsel, an organization reserved for the top 1% of attorneys in the United States. In November 2018 John Zervanos was invited to, and became, a lifetime charter member of the Best Attorneys Of America. He has tried personal injury cases throughout Pennsylvania and New Jersey in both State and Federal Court. John has served on the Board of Governors of the Pennsylvania Association for Justice since 2003. He was elected to two-year terms in 2004, 2006, 2009, and 2011, 2013, and most recently elected to a 2015-2017 term.

He is the founding President and member of the Board of Directors of S.T.A.R. Kids, Inc., an organization founded to support children, patients, and their families in the solid organ transplant program at A.I Dupont Hospital for Children in Wilmington, Delaware.

Pennsylvania “Super Lawyer” by Philadelphia Magazine in the area of Personal Injury, 2004 – 2022

“Leading plaintiffs lawyers in America” as published in Lawdragon, 2007

Pennsylvania Association For Justice, Board of Governors, Member since 2003