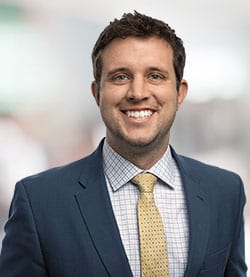 While attending Stetson University College of Law, Mr. Harris continued to develop his passion for trial advocacy. He was a member of Stetsonâ€™s #1 nationally ranked trial team where he competed in five trial competitions across the state and country. Mr. Harris received the Victor O. Wehle Award, the award for the highest grade in his trial advocacy class, the Book Award in Criminal Procedure, as well as obtaining the highest grade possible in his Evidence class.

He interned at the Sixth Judicial Circuit for Judge Thomas Minkoff. During his final year at Stetson University College of Law, Mr. Harris participated in the clinical education program with the Public Defenderâ€™s Office where he worked closely with clients, participated in discovery, and even advocated in several jury and bench trials before graduating law school. He was proud to be elected as a class representative for the student bar association for all three of the years he attended law school and he received the William F. Blews Pro Bono Service Award for his community service efforts.

At graduation, Mr. Harris was honored by the faculty and staff of the law school nominating him to be inducted into the Order of Barristers, a national organization that provides recognition for individuals who have excelled in advocacy and service at their respective schools. After graduating, Mr. Harris was asked to come back as an advocacy skills trainer and coach the law schoolâ€™s trial team. As an advocacy coach, Mr. Harris was able to work with dozens of students, many who became finalists and were recognized as top advocates at their competitions.

Following graduation, Mr. Harris worked for the Public Defenderâ€™s Office for the Sixth Judicial Circuit. While working as an assistant public defender, Mr. Harris represented hundreds of clients in court proceedings, argued numerous motions regarding evidence or other legal matters, and advocated in more than twenty jury trials. He is licensed to practice in all state courts in Florida and the United States District Court for the Northern District of Florida. He is currently involved in the litigation against opioid manufacturers and distributors for their involvement in the countryâ€™s ongoing opioid epidemic.

2019
Present Position with the Firm