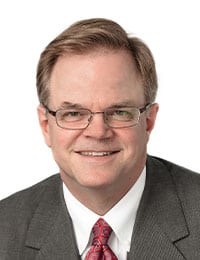 Admitted to the State Bar of Texas in 1987, Mr. Wilson began his legal career at the firm of Fulbright & Jaworski and more recently was a name partner with Goforth Lewis Sanford Wilson, LLP.

Christley v. Marine Drilling Company: Mr. Christley was a Jones Act Seaman, one of three men required to move 2,000 100-pound bags of salt during a night shift. He severely injured his lower back. When he returned with a light duty work release, he was ordered to do regular duty work again. Mr. Christley was hurt severely and never again worked offshore.

Rogers v. Home Furniture Company: A small child pulled open drawers from a piece of furniture. With the drawers open, the furniture was no longer stable. It tipped forward onto the child and the child suffocated. The furniture lacked any anchoring device to keep it from tipping.

Ford v. International Harvester: A long-haul driver struck his head when driving on a highway with potholes. He suffered herniated discs in his neck and back. Mr. Ford contended that the cab of the 18-wheeler had both a manufacturing defect and marketing defect.

Fryar v. Bridgestone/Firestone: A passenger in a conversion van died from injuries sustained when a Firestone tire partially de-treaded. As the driver tried to stop, the van began sliding sideways and struck a guard rail, causing fatal injuries to the passenger. The family of the driver contended that the tire had both a design and manufacturing defect that allowed the tread to separate from the steel belts during normal driving.

Henry v. San Angelo Community Medical Center: Due to a childhood injury, Ms. Henry had vision in only one eye. When hospitalized for suspected pneumonia, nurses elevated her bed for tests, lowered the side rail and then left her unattended. Ms. Henry fell from the bed and her unimpaired eye struck the corner of the side table. The impact ruptured her ocular globe and left her legally blind.

Sharp v. Shannon Medical Center: A male equipment technician of Shannon Medical Center started sexually assaulting a female patient whom he thought was fully sedated. When she awakened, she contacted the nursing staff. The nurses did not record the assault, notify the doctors or call security. The hospital staff washed her sheets and helped Ms. Sharp shower. The nurses approved Ms. Sharp for discharge from the hospital later that day. Three days later, Ms. Sharp went to the police. After first denying the assault, the equipment technician then signed a sworn confession.

Nixon v. Wellington Care Center, Inc.: An elderly man developed more than 20 decubitus ulcers while a resident at a nursing home. Physicians had to amputate both of his legs and he died a few days later.

Mr. Wilson is Board Certified in Personal Injury Trial Law by the Texas Board of Legal Specialization. He is a Member of the State Bar of Texas.

Mr. Wilson and his wife Susan live in Katy, Texas, along with their three children, Christopher, Tyler and Laura.

Read about the $1.45 million insurance verdict won by Mr. Wilson and other firm attorneys in Waco, Texas.