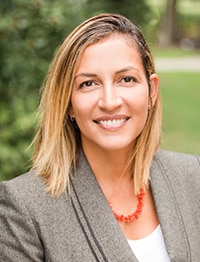 Leila Ayachi joined Lanier Law Firm, in 2018, as an associate in the pharmaceutical liability section.

Prior to joining The Lanier Law Firm, Ms. Ayachi represented clients in a variety of public interest cases, including public and private housing, construction liability, public access, contractor and insurance fraud, and medical benefits claims, which gives her a well-rounded and unique ability of viewing her client’s cases.

During her first semester at Villanova Law School, Hurricane Ike hit her native Galveston community. Ms. Ayachi recruited fellow students and returned home each year to offer a variety of hurricane-related, pro bono legal services for the Galveston County community. Through this effort, over 50 Galveston residents were served and over 1500 hours of pro bono work were completed by the Villanova students. Ms. Ayachi was recognized as the 2011 Anne Bowen Poulin Pro Bono Service award recipient which is given to the student who has contributed the most meaningful pro bono service to those in need. With these efforts, Ms. Ayachi has proven time and time again her heart for service to her community and her passion for justice.

Ms. Ayachi currently resides in Houston with her fiancé and their ancient yellow Labrador.