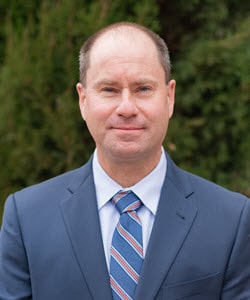 Attorney Matthew Durkin’s renowned career gives him the complex courtroom experience needed to go up against behemoths in the insurance industry. Durkin has dedicated his career to obtaining justice for those in need. Most recently, Durkin served our community as a Jefferson County Chief Deputy District Attorney. Prior to that, he led the Criminal Justice Section of the Colorado Attorney General’s Office as Deputy Attorney General.

With multiple appearances on television shows such as NBC’s Dateline and CBS’s 48 Hours, Durkin has made a name for himself as a tireless advocate for victims of homicide, physical and sexual abuse against children, domestic violence, drug trafficking, and traffic offenses. After years of campaigning for victims in the criminal court, Durkin has turned his attention to the civil court. Specializing in wrongful death, bad faith insurance claims, and catastrophic injuries, Durkin looks forward to assisting victims obtain justice after these life-altering events.

“For 25 years it has been my honor to fight for victims of crimes. I am excited to refocus my passion towards seeking justice for those have been injured due to another’s negligence,” Durkin says.