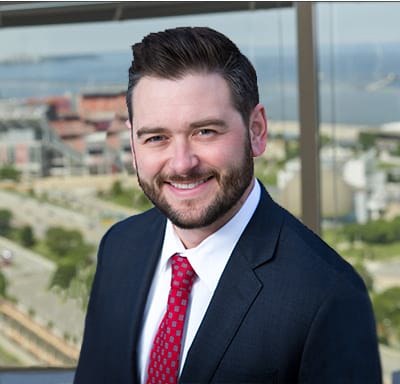 Michael is a trial attorney whose diverse practice currently includes personal injury, police misconduct, product liability, and insurance bad faith litigation. Michael joined Spangenberg, Shibley & Liber LLP in 2020 after practicing in Los Angeles, California with the nationally recognized plaintiff’s firm, Engstrom, Lipscomb & Lack. Michael grew up in Huntsville, Alabama, and moved to Northeast Ohio to raise his two children with his wife, Robyn, who is a native of Chagrin Falls.

Michael has a history of large recoveries on a wide variety of cases, such as police misconduct, insurance bad faith, construction defect, and traumatic brain injuries.

Some of Michael’s notable cases include the representation of an autistic teenager whose lawsuit alleged the insurance company breached its contract with him by denying him the therapy he needed to develop and learn. Michael recovered over $3 million in that case, after winning at California’s Second District Court of Appeal.

Michael has also recovered millions against law enforcement agencies that violated the Constitutional rights of his clients. In 2016, Michael recovered $2,500,000 against the Los Angeles County Sheriff’s Department for shooting his innocent, unarmed client in the leg and killing his best friend.

Despite always working to quickly and efficiently resolve his clients’ cases, Michael knows that sometimes a trial by jury is the only way to get justice. In 2019 and 2020, Michael stood up to the tobacco industry in Florida, representing families who lost loved ones due to the industry’s decades-long conspiracy to conceal the dangers of smoking from the American public, as part of Florida’s ongoing Engle class action litigation. Those three-week wrongful death trials provided invaluable courtroom experience.

Prior to law school, Michael was awarded a United States Fulbright Scholarship and spent a year living and working in Dresden, Germany. Michael received his undergraduate education at Wake Forest University in Winston-Salem, NC, studying German and chemistry and graduating with honors.

$3,250,000 Settlement – Insurance Bad Faith; settled an insurance breach of contract case alleging bad faith denial of services to a severely autistic teen. Won at the Court of Appeal before settling prior to trial.

$2,400,000 Settlement – Traumatic Brain Injury; settled during jury selection a car crash case where the plaintiff suffered a traumatic brain injury. The collision caused multiple facial fractures, and the testimony of both treating and expert neurologists and neuropsychologists established a mild traumatic brain injury.

$2,500,000 Settlement – Police Shooting; settled a police shooting in Mulligan v. County of Los Angeles, et al., Case No. CV:14-9510. The plaintiff was taken hostage in his West Hollywood apartment, and while trying to escape was shot in the leg by poorly trained Los Angeles County Sheriff Deputies. Michael used publicly available data on LASD shootings to link an unsafe County training mantra, “on target, on the trigger,” to staggering numbers of shootings of unarmed people.

$749,000 Settlement – Traumatic Brain Injury; an auto v. bicycle collision, which resulted in the plaintiff developing a mild traumatic brain injury and losing her sense of smell and taste.

$300,000 Settlement – Construction Defect and Fraud; settled a construction defect and fraud case involving the sale of a mold-contaminated home to the plaintiffs.

Outside of the Courtroom

Like several of his colleagues at Spangenberg, Michael came to the Cleveland area to raise his two children with his wife, Robyn, who is originally from Chagrin Falls.

Michael comes from Huntsville, Alabama, but landed in Cleveland by way of California. It was in Redondo Beach, California where Michael and Robyn started their family. Michael and Robyn met by chance in Dresden, Germany while watching the United States play in the 2010 World Cup.