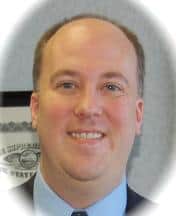 Michael Wallis has been with The Redfearn Law Firm since 2001. He received his accounting degree in 1991 from the University of Kansas, and his law degree from the University of Missouri-Kansas City School of Law in 1996. While in law school, Mike was President of Delta Theta Phi. Mike was admitted to the Missouri Bar in 1996 and the Kansas Bar in 1997. He is a member of the United States District Court for Missouri, Western District, and the United States District Court of Kansas.

Mike has represented victims of motor vehicle and trucking crashes, medical negligence, defective and dangerous products, and dangerous conditions of property. He has successfully tried civil jury cases in the courts of Missouri and Kansas. He has also litigated matters in Illinois, Minnesota, Wisconsin, and Oklahoma. He has been involved in obtaining multi-million dollar verdicts and settlements for the catastrophically injured.

Mike has experience in all facets of trial work from discovery all the way through appeal. He wrote all the appellate briefs that resulted in a very important jurisdictional opinion in the state of Illinois that has been cited by other Courts on numerous occasions. See Soria v. Chrysler Canada.

Mike has also been selected to Missouri & Kansas Super Lawyers for the past five years.

Mike and his wife Sherry live in Prairie Village, Kansas. Mike is lifetime member of the Village Presbyterian Church. In his spare time, Mike enjoys traveling the world with his family, photography, skiing and scuba diving.