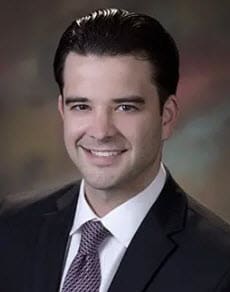 A native of Warren, Patrick J. Moro returned to the Mahoning Valley and joined the firm in 2016.

Most recently, Moro worked at a law firm in Columbus, where he focused his practice on aircraft accident litigation, insurance claims defense and transactional matters in the aviation industry. When the opportunity arose to come back to the area and join the firm where his father is a partner, he took it.

He also brings general business knowledge to his practice. He earned his degree in finance and management in 2009 from Walsh University and also worked for a manufacturing company during his undergraduate years, working in purchasing, logistics and human resources.

He then enrolled at Capital University Law School, where he received the CALI Award in Consumer Law and participated in the law school’s general legal clinic and small-business clinic. He also served as a legal extern for the Honorable Judge John P. Bessey in the Franklin County Court of Common Pleas.

He received his J.D. in 2012 and worked as a business consultant prior to practicing law.

In his spare time, Moro enjoys playing golf, woodworking, and the outdoors.