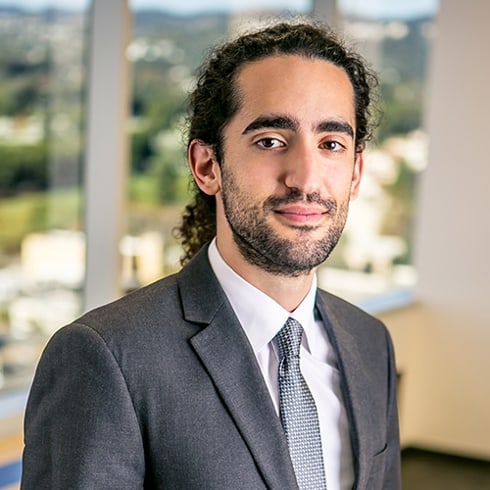 Pedram recently successfully sued the Burbank Police Department (California) for police misconduct, civil rights violations, assault, battery, unlawful seizure, excessive force and negligence. He also obtained a settlement from the City of Irvine when its former mayor violated one of its citizen’s first amendment rights when she blocked him from posting to her personal Facebook page which she was using as a public forum concerning official mayoral business.

He was an integral part of the trial team that won the historic $2 billion verdict against Monsanto (now Bayer) in May 2019 on behalf of a couple who together sprayed Roundup weed killer on their properties for 30 years. The jury in Pilliod, et al. v. Monsanto determined that Roundup exposure caused Alva and Alberta Pilliod’s non-Hodgkin lymphoma, and that Monsanto failed to warn the couple about the cancer risk associated with Roundup use. The jury awarded them $55 million in compensatory damages and $2 billion in punitive damages.

He also served in a similar capacity on the very first Roundup cancer case to go to trial against Monsanto, resulting in a $289 million verdict on behalf of groundskeeper Dewayne “Lee” Johnson. In addition, he participated in the second Roundup trial against Monsanto on behalf of Edwin Hardeman. The jury in that trial awarded Mr. Hardeman $80 million for his damages.

In recognition of his work in the Monsanto Roundup trials, Pedram has received well-deserved awards. He was selected as a winner on Law360’s Rising Stars Top 40 Under 40 list for 2019, which recognizes attorneys whose legal accomplishments transcend their age. Pedram has also been selected to Southern California Super Lawyers® – Rising Stars and the National Trial Lawyers Top 40 Under 40.

Various legal journals have top listed our landmark Roundup verdicts. The Daily Journal listed the $289M Johnson verdict among its top verdicts of 2018, the National Law Journal listed it in their Top 100 and Courtroom View Network listed it in its Top 10 Most Impressive Plaintiff Verdicts of 2018. Topverdict.com listed the $2B Pilliod verdict as #1 in California, #2 in the nation and the ninth largest verdict in history in 2019. The National Law Journal and the Daily Journal also recognized the Pilliod verdict in their top lists.

After the Johnson v. Monsanto verdict, UCLA School of Law, Emmett Institute on Climate Change & the Environment, and The Resnick Center for Food Law & Policy, as well as Yale Law School’s Collaboration for Research Integrity and Transparency (CRIT) program, invited Pedram to speak about how the trial team won the verdict and what it means for the legal community and the environment.

Pedram joined Baum Hedlund in September 2016 as a law clerk and was hired as an attorney in December 2016 after passing the California bar exam. Before joining the firm, Pedram pursued a Master of Laws degree (his second post-graduate degree) at the University of Southern California Gould School of Law, where he was admitted on a merit scholarship.

During his time at USC, Pedram was Senior Editor of Los Angeles Public Interest Law Journal (LAPILJ), an independent collaboration of law students from Southwestern, Loyola, Pepperdine, UCLA, and USC. The journal is a platform for students, practitioners, and academics to address the structural inequalities within the legal system from the perspective of public interest. Contributors collaborate based on a shared concern for the adequate provision of legal services to disenfranchised groups.

Pedram’s interest in law was forged at the University of Birmingham Law School in the United Kingdom. He graduated in 2013 with a Bachelor of Laws (LL.B) and proceeded immediately to Nottingham Trent University in the U.K., where he received an M.A. degree in criminology.

While studying for his first master’s degree, Pedram was a Postgraduate Outreach Ambassador with the Schools, Colleges and Community Outreach program at Nottingham Trent University. As part of this position, he taught Farsi at a local after-school program that provides resources to disadvantaged communities around Nottingham.

Pedram also volunteered his time with The Outreach Program to host presentations and seminars at local disadvantaged secondary schools. These events highlighted the utility of learning a second language for the purposes of entering higher education with transferable skills and knowledge of other cultures in an increasingly diversified U.K.