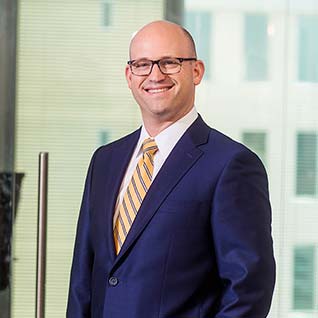 Philip Gold is a native of Miami, Florida where as a young child he had the good fortune of watching his father, David Gold, practice law and build his law practice from the ground up. Now, Philip is proud to be a partner with his father at the law offices of Gold & Gold, P.A..

Philip has built his reputation on hard work and dedication, and by placing his clients' needs above all else. His clients trust his ability to handle their claim with vigor and compassion, whether through negotiations or at trial. Philip is a tried and true trial lawyer, taking on some of Florida's most complex cases across the state. His trial skills and ability to win is known to insurance carriers and defense attorneys alike, helping him achieve maximum results.

Among the hundreds of settlements and verdicts over his career, Philip has obtained multiple 7-figure results, a 7-figure verdict which stands as the second largest verdict in Clay County Florida, and several 8-figure settlements. His reputation for success is recognized by his peers, as Philip has been selected to U.S. News & World Report's Best Lawyers in America, Florida Super Lawyers' Rising Stars, and Florida Trend's Legal Elite Top Up and Comer.

In addition to the dedicated work on behalf of his clients, Philip enjoys donating his time to Florida organizations that help promote the importance of our jury trial system, as well as protect the interests of Florida citizens from competing interests of big business. Philip served seven years on the Board of Directors of the Florida Justice Association, where he lectures to other trial lawyers across the state at various Continuing Legal Education seminars, and volunteers as a lobbyist in Tallahassee to help educate the legislature on bills that affect injured folks, their families, or the civil justice system as a whole.

Philip is currently the President-Elect of the Miami Dade Trial Lawyers Association, an organization that promotes the importance of our local justice system. Its members select judges for their dedication to our civil justice system, award scholarships to deserving law students, volunteer to perform community service, and host events throughout the year for Miami Trial Lawyers to stay connected with each other.

Philip received his B.A. at the University of Florida in 2002, after completing a dual degree in Political Science and Sociology. In 2006, Philip earned his J.D. from the University of Miami School of Law. Every day he thinks about how he can use his education, his effort, and his time to make a difference in people's lives.