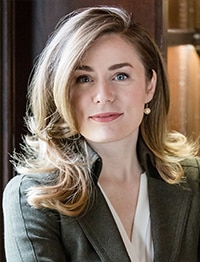 Rebecca Phillips joined The Lanier Law Firm team because she believes in the power of the civil justice system to promote good corporate behavior and public safety. She loves helping individuals utilize that power to seek justice, through both trial work and appeals. Rebecca's practice is diverse, having experience in mass torts, class actions, and complex commercial cases. Most recently, she focuses her time on litigation concerning the opioid epidemic and on litigation concerning injuries caused by the diabetes drug Onglyza.

Prior to joining the Lanier Law Firm, Rebecca worked passionately in representing nearly 2,000 individuals who were injured by transvaginal mesh. During that time, she also submitted amicus briefing to the Supreme Court of the United States and the Supreme Court of California on a seminal case concerning personal jurisdiction, and she wrote to the Supreme Court of Texas on behalf of a client in a contract dispute. Prior to that, Rebecca represented companies in commercial and class action litigation.

Rebecca is a graduate of Yale Law School, where she served as an editor of the Yale Law and Policy Review. She is also a graduate of Arkansas State University, where she was voted by the faculty as Most Outstanding Political Science Graduate.

Rebecca grew up in small-town Arkansas, the daughter of an English teacher and a football coach. As a native of The Natural State, when Rebecca is not practicing law, she can be found outdoors - running, rock climbing, or hiking. She is also an active member of the Houston Blues Dance Community.