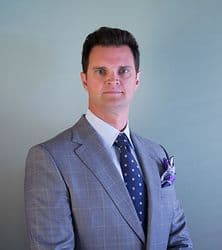 Since 2000, Richard Kennedy III has been practicing with Richard R. Kennedy. He has recovered fair settlements for his clients and has had great success in the court room.

Richard graduated from the Southern Methodist University in Dallas, Texas in 1996 with a bachelor of the arts degree in history and a minor in French. He graduated from Loyola Law School in New Orleans in 1999. While in law school, Richard clerked for the District Attorney of the 24th Judicial Court and for the law firm of Middleburg, Riddle, and Gianna. After graduating from law school, he was a law clerk for the Honorable Gerard Wattigny of the 16th Judicial Court of Louisiana.

In 2000, Richard was admitted to the Louisiana bar. He is also admitted to practice before the, the US. Court of Appeals for the Fifth Circuit, and the U.S. District Courts for the Western, Middle, and Eastern Districts of Louisiana.