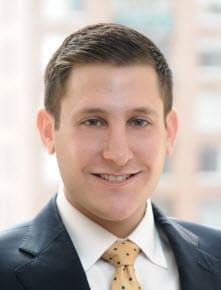 As an associate at Levy Konigsberg LLP Bobby focuses his practice on cosmetic talc and tobacco litigation, representing individuals who suffer from lung cancer, mesothelioma, and other asbestos-related diseases. Bobby is motivated and committed to giving victims a voice and attaining justice for those who have been wronged.

Bobby litigates all stages of complex time sensitive cases from investigations throughout depositions, critical motion practice, trial and appeals. He navigates different jurisdictions and has been part of trials in New Jersey, New York and Massachusetts.

In October 2018, Bobby was part of a trial team that obtained a $43.1 million verdict against R.J. Reynolds on behalf of his client who was exposed to asbestos as an auto mechanic and was also a long-time menthol cigarette smoker. The jury found R.J. Reynolds liable on five counts and awarded punitive damages. This was the first case tried to verdict involving both tobacco and asbestos defendants.

Prior to joining Levy Konigsberg LLP, Bobby clerked for the Honorable Arthur Bergman, J.S.C., of the New Jersey Superior Court, Middlesex County Vicinage. Bobby received his Juris Doctor from the Benjamin N. Cardozo School of Law where he graduated with concentrations in Civil Litigation and Criminal Procedure. During this time, he served as Symposium Editor of the Cardozo Journal of Conflict Resolution and participated in the Intensive Trial Advocacy Program (ITAP). Bobby gained additional legal experience as a member of the Federal Criminal Litigation Clinic at the U.S. Attorney’s Office, Southern District of New York, as a judicial intern to the Honorable Joseph A. Dickson, U.S.M.J., of the District of New Jersey, and as an extern at the Social Security Administration, Office of General Counsel. Bobby also worked for a preeminent mass torts and medical malpractice firm in Manhattan.

In 2020 Bobby was named to the top 40 Lawyers Under 40 in New York by The National Trial Lawyers. Bobby was also named to the the New York Super Lawyer's Rising Stars list by Thomson Reuters.

Bobby grew up in New Jersey where he currently lives with his wife and their dog, Marty. He is an avid hockey fan and enjoys running, biking and skiing.