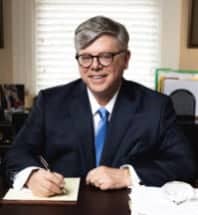 Robert N. Heath, Jr. is a native of Pensacola, Florida and a graduate of Auburn University and the Florida State University College of Law. A former state court prosecutor, Robert has a wide range of legal experience representing both plaintiffs and defendants in personal injury, product liability, insurance, medical malpractice, and mass tort cases for over 38 years. He has been board certified as a civil trial lawyer by The Florida Bar and the National Board of Trial Advocacy for over 29 years and a Board Certified Civil Practice Advocate since 2012. Robert holds an AV peer review rating from Martindale-Hubbell, has been recognized as one of Florida's Legal Elite, and as a Florida Super Lawyer for the past 12 years.

Robert has tried over 100 jury trials and argued cases before the First District Court of Appeal and the Florida Supreme Court. He is one of thirteen lawyers nationwide appointed on a bipartisan basis by the U. S. District Court in Louisiana to serve on the Appeals Panel of the Deepwater Horizon Economic and Property Damage Settlement Program, the largest settlement in U.S. history.

Robert has been a certified mediator for over 25 years and has mediated over 2,000 disputes involving personal injuries, product liability, medical malpractice, construction defects, police misconduct and excessive force, fire loss, sexual harassment/employer liability, homeowner associations, real property claims, hurricane damage claims, and toxic tort litigation. He is a Fellow of the American College of Civil Trial Mediators, a Fellow of the American College of Board Certified Attorneys, a member of the National Academy of Distinguished Neutrals, and the Florida Academy of Professional Mediators. He received a special appointment by the Florida Insurance Commissioner to mediate and resolve hurricane claims arising from Hurricane Erin and Opal and has mediated numerous disaster claims.

Robert is also a Florida Supreme Court Qualified Arbitrator and has extensive experience as an arbitrator, having served as a nationwide arbitrator for the Celotex Asbestos Settlement Trust, the Fibreboard Global Asbestos Settlement Claims Trust, the Dalkon Shield Claimants Trust, and the Piper Aircraft Corporation Irrevocable Trust. He has arbitrated cases throughout the United States and served as chief arbitrator for consolidated toxic exposure claims arising from a chemical exposure as well as numerous insurance and property disputes.

Robert has a proven track record of resolving disputes and the experience from both sides of the courtroom that make him an effective mediator.