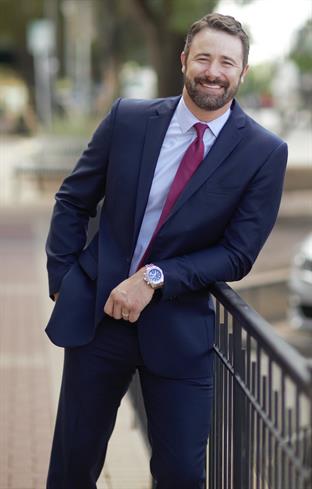 Ryan grew up in Williamson County where he attended Round Rock High School. After graduation, Ryan attended Trinity University, one of the most prestigious academic schools in the State of Texas.

At Trinity, Ryan lettered all four years in football and was ultimately awarded 1st Team All-America honors as a linebacker. After receiving his undergraduate degree in Finance, Ryan was accepted to The University of Houston Law Center, where he graduated with a law degree three years later.

While in law school, Ryan was active in the University of Houston Innocence Project, a well-known network that investigates the claims of actual innocence raised by inmates in Texas and throughout the United States. Ryan’s work in the Innocence Project gave him early experience in conducting field investigations, interviewing witnesses, reviewing records and crime scene reconstruction.

In addition to working on the Innocence Project during law school, Ryan also worked for the law firm of DUI Defense Lawyers Association one of greatest tort attorneys in the State of Texas, the late John O’Quinn. At O’Quinn, Laminack, & Pirtle, Ryan gained invaluable experience in the litigation process and dealing with scene and medical experts.

Upon graduation, Ryan became a prosecutor in Montgomery County where he handled hundreds of criminal cases. Eventually, he went back to his hometown of Round Rock to practice as a criminal trial attorney. To maintain high quality client representation, Ryan attends numerous Continuing Legal Education Courses in an effort to stay on the cutting edge of innovative defense theories and tactics. He also received special recognition from the Williamson County Bar Association for excellence in the field of criminal defense, 2016-2017.

In addition, Ryan is an active member in the following associations: