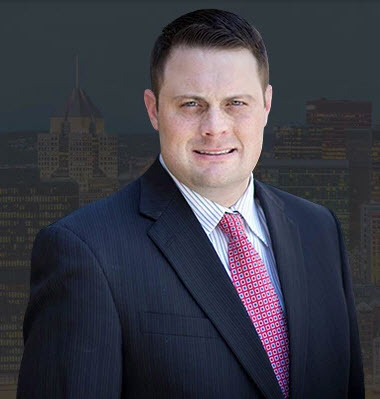 Sean Logue is a diligent attorney who excels at representing people who have been charged with criminal and traffic offenses in Pennsylvania. He constantly strives to defend his clients in the state and the federal court as well as before other administrative agencies.

He received his undergraduate degree from Washington and Jefferson College in 2004 with honors in Political Science. Sean went on to earn his law degree at West Virginia University where he was the Student Bar Association Treasurer. His name was mentioned under the top 40 trial lawyers of 2012-2014. He is also a Pennsylvania Super Lawyers, Rising Star since 2014.

Sean achieved his dream of starting his own practice in 2008. He has represented many people in various kinds of criminal cases, such as traffic offenses, sexual assault, homicides, DUI and drug crimes, and other white collar crimes.

He has successfully represented defendants all across western Pennsylvania and the tri-state area. He represents several nation trucking companies and drivers associations for all of their complex traffic ticket needs. The Governor has appointed him to be a member of the council of trustees of California University of Pennsylvania. He is associated with the National College for DUI Defense since 2009.

He is a proficient legal advocate who is highly professional and immensely knowledgeable. Consistently updated on the recent changes in DUI law, he has also won many DUI trials. He has in-depth knowledge about every aspect of criminal defense and has handled several cases in many district courts too. He is also known to have made professional relationships with judges, prosecutors and magistrates. He believes that trusting your attorney is extremely critical for a case. Therefore, he values honest and frank communication with all his clients. He immediately discusses any information he gathers on the case with his client. He makes sure you are aware of every minute detail regarding the case at every stage of the legal proceedings.

When you are looking for an esteemed lawyer in Pennsylvania, it can be difficult to find the best one. Sean Logue is strongly committed to meeting the growing needs of his clients and provides them with the best possible defense.