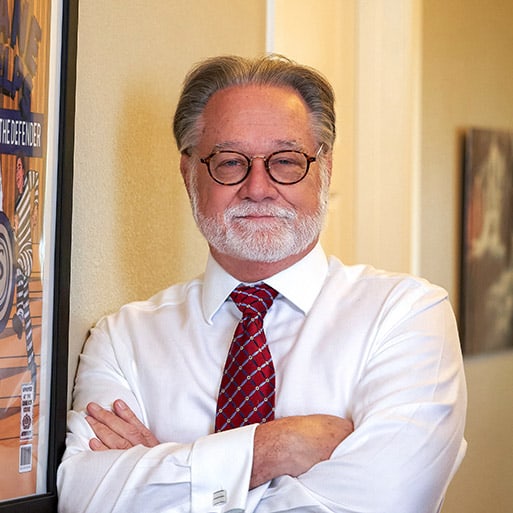 He is highly regarded for his meticulous attention to detail, his exhaustive legal research skills, his leave-no-stone-unturned trial preparation, and his ferocious defense of his clients’ rights. Shane never gives up, which has become a hallmark of his practice.

Shane founded Shane Phelps Law. because he feels strongly that formidable criminal defense attorneys make the criminal justice system work best. He is dedicated to providing the best legal defense in every case he handles.

Shane’s background, education, and experience speak volumes about his dedication, tenacity, and ability. Shane is a former United States Marine, achieving the rank of sergeant meritoriously in less than two years, an accomplishment unheard of in the Marines. He graduated from two of the best universities in the country, Rice University in Houston (B.A. English, 1983) and The University of Texas School of Law in Austin (J.D., 1987).

After graduating from law school, Shane turned down lucrative offers from civil law firms to start a career in the criminal justice system with the Harris County District Attorney’s Office in Houston, one of the busiest and best prosecutor offices in the United States. Shane left the Harris County District Attorney’s Office in 1990 to take a position as a special prosecutor with the Texas Attorney General’s Office, traveling Texas assisting prosecutors who needed special expertise in complex and high profile cases.

In 1993, Shane was promoted by then-Attorney General Dan Morales to lead a new division, the Prosecutor Assistance and Special Investigations Division. In 1998, Shane served as criminal justice advisor to the John Cornyn for Attorney General Campaign in Austin and upon General Cornyn’s election, was appointed Deputy Attorney General for Criminal Justice for the State of Texas.

Shane came to Central Texas in 2001 to accept the position as First Assistant District Attorney, a position he held until leaving in 2011 to found Shane Phelps Law.

Shane is a board-certified criminal law specialist. Only a small percentage of criminal defense attorneys in Texas hold this distinction. The certification from the Texas Board of Legal Specialization is awarded only after years of experience, recommendations from colleagues and judges, extensive trial experience, and successfully passing a rigorous examination. Shane has been board-certified since 1992. Shane is also a member of the College of the State Bar, an elite legal fraternity that recognizes attorneys who exceed the minimum continuing legal education requirements every year.

Shane has been a popular lecturer on a variety of trial advocacy and legal topics over the years, including white-collar crime, public corruption, ethics, the death penalty, and search and seizure law. He was a frequent lecturer for the Texas District and County Attorneys Association and is often asked to speak to community groups about the criminal justice system. Since he became a criminal defense attorney, Shane has been invited by elected prosecutors and The Texas Rangers to train law enforcement officers. Shane has also published numerous articles on public corruption, ethics, the death penalty, and other legal issues.

Shane has appeared on television numerous times to discuss the criminal justice system and topical legal issues. Shane is the legal analyst for KBTX in Bryan/College Station and appears frequently on KAGS-TV in Bryan College Station. Over his career, Shane has also been featured on Dateline NBC, NPR, Snapped, Killer Couples, on the covers of two magazines (The Texas Lawyer and The Austin Chronicle), in the Texas Bar Journal, and in numerous newspapers across Texas.

Shane is also a successful appellate lawyer having argued before several courts of appeal in Texas and several times before Texas’s highest criminal court, the Texas Court of Criminal Appeals. In 2013, Shane argued and won The State of Texas v. Granville, 423 S.W.3d 399 (Tex. Crim. App. 2014), a significant case involving warrantless searches of cell phones held in an inmate’s property. Granville changed the law in Texas and required law enforcement to obtain a search warrant before searching a cell phone. Shane also recently successfully argued for dismissals for a client under the Interstate Agreement on Detainers Act in a published opinion handed down by the First Court of Appeals in Houston. He is also licensed to practice in the United States Supreme Court.

A leader in the legal community, Shane founded, along with fellow attorney Phil Banks of Bryan, Atticus Finch Day. This holiday celebrates the ideals embodied in the fictional character of Atticus Finch from the Pulitzer Prize-winning novel, To Kill a Mockingbird. The event has become wildly successful and has attracted high-profile speakers from all over Texas, including famed trial attorney Rusty Hardin, civil and criminal defense attorney John Raley, who successfully won Michael Morton’s freedom after years of unjust incarceration, legendary Texas trial attorney and State Bar President Buck Files of Tyler, and former Court of Criminal Appeals Judge Cathy Cochran.

Leader in His Field

In 2017, Shane was designated by the Chemistry and Law Division of the American Chemical Society, the largest scientific organization in the world, as a Forensic Lawyer Scientist. This designation does not come easily and is held by fewer than 150 attorneys across the United States. It is the culmination of four weeks of intensive study of analytical chemistry, physics, toxicology, and the application of scientific knowledge to the defense of criminal cases, especially DWI, followed by a rigorous written examination. Designees of this accomplishment receive the coveted “Golden Column” award, named for the apparatus in gas chromatographs used for testing alcohol content in human blood.

Most importantly, Shane is a devoted husband and father. Shane’s wife, Jean, is an attorney, Certified Public Accountant (CPA), and certified mediator who works with him at Shane Phelps Law. Shane’s daughter, Mary Claire, is in her freshman year of college. As a father, Shane has a deep appreciation for the concern parents have for their children and their futures. Shane zealously represents students at Texas A&M and Blinn College who have been accused of criminal offenses that threaten their futures.