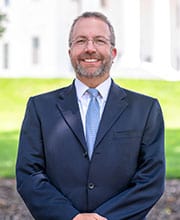 He is an active member of the Virginia Trial Lawyers Association (VTLA), the Richmond Bar Association and the American Association of Justice (AAJ). He serves as a Fellow with the College of Workers' Compensation Lawyers and on the board of governors of both VTLA and WILG. He is the past chair of the workers’ compensation section for VTLA and lobbies on behalf of injured workers at the Virginia General Assembly as the legislative co-chair of VTLA’s Workers’ Compensation Section.

Because of his tireless work on behalf of his clients, Stephen has also been recognized by Virginia Lawyers Weekly as a 2021 Leader in The Law. Stephen has also been selected as a Virginia “Super Lawyer” for the last three years, as well as for inclusion in the publication “Best Lawyers in America” since 2016 in the category of workers’ compensation. He has been named by WILG as one of the Nation’s Top 100 Injured Workers’ Attorneys. Since 2016, Stephen has also been named to the list of the Top 100 Lawyers in Virginia and the Top 50 Attorneys in Richmond, and he was named the Top Claimants Workers’ Compensation Attorneys in Richmond in 2021.

In addition, Stephen has written numerous articles and frequently lectures on numerous occasions in regard to his areas of specialty; he is a recognized expert in regard to the interplay between both personal injury and workers’ compensation cases involving the same accident.

Stephen not only has expertise in handling accident and disability cases, but he spends much of his free time working on his race car so he can get back behind the wheel at the next race. He regularly races in the NASA Mid-Atlantic region circuit and has numerous wins and class championships to his name.