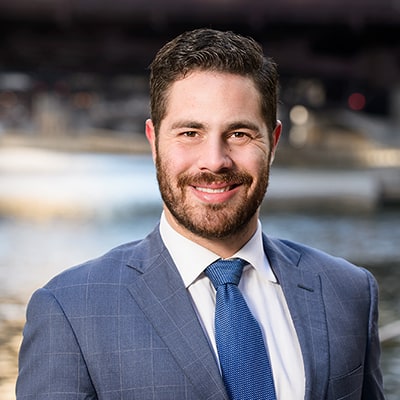 Steven R. Jacobson was born in Chicago, Illinois. He is one of the founding partners of the Law Offices of Jacobson & Tchernev. Mr. Jacobson received his Bachelor's Degree from the University of Illinois in 2006, graduating with highest honors. In 2010, Mr. Jacobson received his Juris Doctorate from Chicago Kent-College of Law. Mr. Jacobson also received multiple awards for his work in trial advocacy while in law school and was on the Dean's List. He has been licensed to practice law in Illinois since that time.

Mr. Jacobson has worked for a variety of firms prior to opening the Law Offices of Jacobson and Tchernev. Mr. Jacobson handled Criminal Defense, Family Law, Plaintiff Personal Injury, and Entertainment Law cases, while working at some of Chicago's most prestigious law firms. Mr. Jacobson focuses his practice primarily on personal injury claims and relishes the challenge and opportunity of representing his clients at trial. As a result, Mr. Jacobson has taken more than fifty personal injury cases to verdict in the past six years, with great results. Mr. Jacobson is also a member of a variety of different local legal associations including the Illinois Trial Lawyers Association, the Chicago Bar Association, the Illinois State Bar Association, and is admitted to practice in the United States District Court for the Northern District of Illinois.

Mr. Jacobson has collected over Thirty-Two Million Dollars in settlements and judgments for his clients in the past ten years.