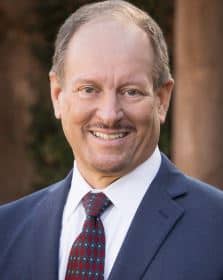 Stuart Chandler is proud to call the Central Valley his home. His roots in the Valley date back to the late 19th century when his great-grandfather, W.F. Chandler, started farming just south of Fresno. To this day Chandler Farms (now owned and operated by Bill and Carol Chandler) flourishes. Chandler Airport has served local aviators for over 70 years on land donated to the City by W.F. Chandler. Stuart lives in Fresno with his wife, son and daughter. He has served on the Boards of several local civic and ministerial associations.

Stuart graduated from Bullard High School in 1972. After that he went on to graduate from Claremont Men's College (now Claremont McKenna College) with Honors in 1976. He then moved to Salem, Oregon to attend Willamette University College of Law. While in law school he won numerous moot court (appellate advocacy) competitions, including the State competition.

As a law student he worked for the Solicitor General's Office of the Attorney General for the State of Oregon. Under special student appearance rules he was allowed to argue numerous cases before the Oregon Court of Appeal. To this day he maintains a license to practice law in the State of Oregon.

After graduating from Willamette in 1979 Stuart returned to Fresno where he started his legal career with the firm of Baker, Manock & Jensen. While there he was assigned to the civil litigation department, focusing on medical malpractice defense and insurance related cases. In 1985 he opened the offices of Stuart R. Chandler, Attorney at Law. From that time to the present the office has represented people with personal injury, wrongful death and medical malpractice claims. For the past 10 years a significant part of the practice has involved prosecuting cases against nursing homes for abuse and neglect of the elderly.

Stuart Chandler is well recognized as one of Central California's leading trial lawyers.
In 2001 he helped re-establish the Central Valley Trial Lawyers Association (formerly CCTLA) and then served as its President for 3 years.
He has been on the Board of Governors of the Consumer Attorneys of California since 2002.
He is also a member of the Fresno County Bar Association, the California State Bar, the Oregon State Bar, American Association for Justice, and the California Advocates for Nursing Home Reform.
He has received numerous honors and awards, including Proclamations from the California Senate and Assembly for his advocacy - particularly on behalf of the elderly.
He has been an invited speaker at legal seminars on elder abuse, insurance bad faith and punitive damages.